Depend of the episode

???
Alejo is one of the main characters of the argentinian cartoon Alejo y Valentina. He is the boyfriend of Valentina

He is voiced by Alejandro Szykula, who also voiced the majority of the characters of the cartoon.

Alejo is a black haired man with a white skin and wears a purple shirt and black pants.

Castlevania: Cycle of the Moon

Tragic Monster Slayer
Nathan Graves is the main protagonist of Castlevania: Cycle of the Moon.

In Super Smash Bros. Ultimate, Nathan Graves appears as an advanced-ranked primary attack-type spirit in the World of Light. His spirit battle is a stamina battle against a green Richter Belmont who has a extra mid air jump with increased jump but reduced jump height on the Find Mii Stage with no hazards.

No information
Starly is a major character fron Densetsu no Starfy series, she is the younger sister of Starfy.

Starly is a pink star who wears an red bow.

In Super Smash Bros. Brawl Starly (with the name of Stapy) appears as an collectionable trophy and an sticker who increases the user's special indirects. In Super Smash Bros. Ultimate, Starly appears as an advanced-ranked primary neutral-type spirit in world of light who decrease the user's weight. Her spirit battle is against Jigglypuff with the temporary invincibility on the Tortimer's island stage. 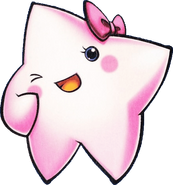 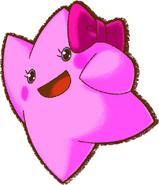 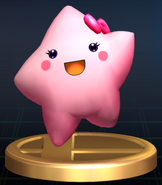 Starly's trophy from Super Smash Bros. Brawl.
Add a photo to this gallery

Find the pieces of the ship to return to his planet

Catch the humans and return them to their planet (both succeeded)

Heroic Alien
Earl is one of the titular main protagonists (alongside ToeJam) of the SEGA's videogame franchise ToeJam & Earl. He is a alien from the planet Funkotron.

He was voiced by Greg Brow.

Earl is a orange fat alien who wears a black glasses, blue shorts with red points and black and white.

Afther the events of his first adventure,

ToeJam & Earl: Back in the Groove

Earl's artwork from ToeJam & Earl in Panic on Funkotron.

Earl's artwork from ToeJam & Earl III: Mission to Earth.
Add a photo to this gallery

Stop the Demon King (both succeeded)

Princess has long blodne hair, She wears an blue dress with a red bow in the center, an brown belt, two red shoes and a blue hat.

SNES Longplay 183 Magical Pop'n
Add a photo to this gallery

Heroic star
Ristar is the main protagonis of the SEGA megadrive videogame of the same name.

Ristar is a star with eyes and a mouth, he wears two white gloves and two white shoes with yellow lines.

???
Yumetaro is the main protagonist of the NES videogame Gimmick!

Yumetaro is an small green youkai with two eyes, an orange horn on his head and two brown shoes

Add a photo to this gallery
Retrieved from "https://hero.fandom.com/wiki/User:Richardgamerxx/sandbox?oldid=2223230"
Community content is available under CC-BY-SA unless otherwise noted.
FandomShop Newsletter Paramount+