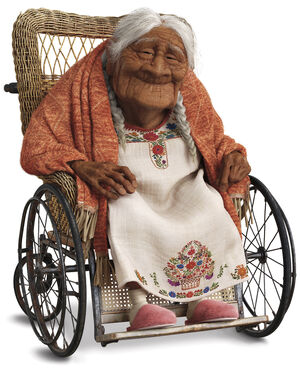 What is the work?

Coco is the 19th feature film released by Disney/Pixar about a Mexican boy named Miguel Rivera who lives in a family of shoemakers that prohibits music due to an incident in the family. On the Day of the Dead, Miguel gets cursed and finds himself in the Land of the Dead where he's searching for his great-grandfather.

Who is she? What has she done?

Mama Coco is the aging great-grandmother of the Rivera family and Abuelita Elena's mother who's supportive of her great-grandson's love of music...even though she tended to be scatter-brained and forgetful of his name. While the rest of her family willfully chose to forget about Hector when he never came back when he decided to pursue a music career, Coco never held a grudge against her father and kept every letter from him a secret and also a picture of him from the family portrait.

However as she was getting older, she was slowly beginning to lose her memories of her father which threatened to have him experience a second death due to no one remembering him in the land of the living. When Hector grants Miguel his blessing to return despite him being on the verge of being forgotten, he goes against his grandmother's demands and plays the song "Remember Me" to Coco which reinvigorates her memories. From there, she decides to tell her family about her late father and as such, Hector's picture is re-added to the family portrait.

The film ends with Mama Coco passing away sometime during the time gap and reuniting with her father in the afterlife.

Aside from being slightly senile due to her old age, not much. She never held a grudge against Hector for leaving her and her mother and then seemingly disappearing and still held onto the hope of him returning to her. While she does deliberately keep the letters he sent her a secret from her mother as well as the picture and placed it in the ofrenda, I wouldn't call that a strike against her. It just plays into how much she truly loved her father.

Due to her age, she is often found being tended to gently by her living family members and is loving despite her senility. She also ironically ended up saving her father by keeping all of his writings. It shows not only how much she loved Hector, but she also saved him from being forgotten due to her determination.

Retrieved from "https://hero.fandom.com/wiki/User_blog:AustinDR/PG_Proposal:_Mama_Coco?oldid=1804498"
Community content is available under CC-BY-SA unless otherwise noted.