PG Proposal: Grace from Home on the Range

Hello again and welcome to a new Pure Good proposal from an animated film of my childhood, the candidate is Grace from Home on the Range. 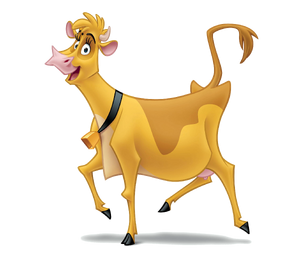 Home on the Range is the 45th animated film from Disney Animated Canon.

Grace is one of the cows of Pearl in a place called "Little Patch of the Heaven", alongside with Maggie and Mrs. Calloway They embark on a mission to save their home from a foreclosure and defeat the West's most feared criminal Alameda Slim.

Grace shows no corrupting factors, she is very sweet and quite generous, she solves violence in defense mode.

Unlike Maggie, Mrs. Calloway and Buck who has brutes and jerkish moments, Grace is pacifist and has a poor singing talent, However, she's shows more courage to help others, during the theft of Slim's cattle, she saves Maggie and Calloway who were hypnotized by Slim's yodel before he takes them to the Echo Mine.

Also alongside with Mrs. Calloway saved Maggie from drowning during a flood in the middle of the desert, save Buck from a shot that Rico was about to do and also defeat Slim who was already about to buy all the cattle of Little Patch of the Heaven and silence him by throwing a cowbell in his mouth.

I think these are Grace's qualities.