As promised, it was time to make the proposal of our candidate and in that case is Hunk from Voltron: Legendary Defender. 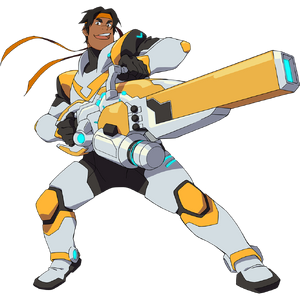 Voltron: Legendary Defender is an American-Korean animated series produced by Dreamworks Animation and Studio Mir, and is a Reboot of the Original series "Voltron" of 1984. It is set in a futuristic environment where "quintessence" (or planetary energy) can be harnessed to power vehicles and cast magic. The series focuses on the relationship on a group of soldiers known as Paladins who must work together to power a giant robot called Voltron to defeat the Galra Empire.

Who is Hunk? and what's he done?

Hunk is a Samoan and the Voltron Paladin who piloted the Yellow Lion. Previously he was an Engineering cadet alongside with Lance and Pidge, like their companions they became the defenders of the universe to end the Galra empire.

While highly intelligent, he is also known to have a habit of having a large appetite when it comes to food. Nonetheless, he is considered the heart and soul of the team, and is idolized by his comrades.

Like Pidge, Hunk has shown heroic acts and here I have what his acts of kindness have been during the series:

As far as I know, Hunk does not have very negative traits only in the episode "The Depths" was he being mind-controlled by the Queen of the civilization of Mermaids, however I do not consider it as disqualifying, He is a very kind, sympathetic and selfless paladin and with very important actions to protect his family, friends and defend the universe.

I say yes, Hunk is really a good candidate with all these qualities to approved him, and for the next proposal, the next candidate will be Shiro.