Hi everyone, after taking a good break from making so many proposals last month, I'm back and today i bring a new candidate from Pure Good Proposal and is Will Turner from Pirates of the Caribbean. 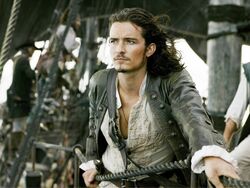 Important announcement: Only analyze 3 of 5 movies in which he appears, since in the fourth, he is completely absent and in the fifth, he only appears in the introduction, saying goodbye to his son Henry.

Pirates of the Caribbean is a series of fantasy swashbuckler films produced by Jerry Bruckheimer and based on Walt Disney's theme park attraction of the same name.

The stories follow the adventures of Captain Jack Sparrow, Will Turner and Elizabeth Swann, Taking place in a fictionalized version of the Golden Age of Piracy, and are set primarily in the Caribbean.

Who is Will Turner?

William Turner Jr. is the son of Bootstrap Bill Turner, During the introduction of the first movie, he was rescued by Elizabeth, his father Weatherbyn, Norrington, and Gibbs as a child after a ship will end in flames by the work of the Black Pearl, 8 years later he embarks on a mission and searches for clues (along with Jack Sparrow) to reunite with his father who is trapped in The Flying Dutchman, piloted by Davy Jones.

To begin I am going to show you what are the qualities of Will in the three films, Unlike Jack Sparrow, he is in a damsel and comic relief role, be prepared to have moments when he behaves like a jerk.

Pirates of the Caribbean: The Curse of the Black Pearl:

Pirates of the Caribbean: At World's End:

It may be that Will has a certain corrupt factor, when he met Jack Sparrow for the first time, he told him that he does not make friends with pirates and after a brief sword-handling training, Will throws at Sparrow, the sword he used but without injuring him, when he tried to escape and when he knocks him unconscious with an oar, just because he didn't want to wait too long and also leave it behind with Barbossa and his crew (it was only to do the right thing), and can even use violence when necessary to either kill some ghost pirates, cannibals, pirates cursed by the flying dutchman or someone who crosses his path, in the first film, they stole with Sparrow the ship called Interceptor leaving some soldiers in a boat, During the introduction of the second film he is arrested alongside with Elizabeth and his father by Lord Beckett, for a crime that he did not commit and for freeing Jack Sparrow guilty of crimes of the corana and the empire and conviction, accept Cutler Beckett's deal to take Jack's compass, fight against with Sparrow and Norrington in Sword fight to who's kill Davy Jones, or try to steal the navigation charts from Sao Feng in order to search for Jack Sparrow in the domain of Davy Jones, he also gave Beckett, Jack's compass, but it is not necessarily to disqualify, Will is defensively a good-hearted guy.

In conclusion, Will is superior to Jack in all these actions and qualities, He is not only the most admirable character in the franchise but also the true main protagonist.