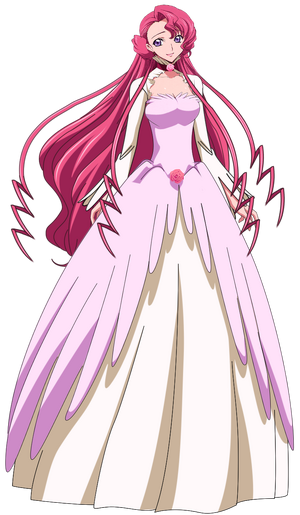 This proposal is for Euphemia from Code Geass.

Code Geass is a 2006 anime by Sunrise, focusing on exiled Britannian prince Lelouch vi Britannia, who uses the mind-control power of Geass to start a revolution against the Britannian Empire, which has taken over Japan, re-naming it "Area 11."

Who is Euphemia and what has she done?

Euphemia li Britannia is a Britannian princess and Lelouch's half-sister. Unlike many others in the royal family, she has no prejudice towards the Japanese and wishes to reunite with Lelouch and bring peace. She is appointed to Area 11 as the "sub-viceroy" and meets Suzaku Kururugi, who she quickly develops feelings for. She pretends to be an ordinary person, and they spend the day together. When a racist Britannian tries to pick a fight with Suzaku and viciously insults his heritage, Euphemia grows angry and smacks the man, telling him to leave Suzaku alone, which earns Suzaku's respect. When the Purist Faction tries to assassinate Jeremiah and try to kill Suzaku as well, Euphemia runs unarmed into the midst of the fighting to command a stop to the battle, revealing her identity as a princess. She tells Suzaku about her pacifist motivations and asks him to help her in preventing any unnecessary deaths.

She later gets caught up in a hostage crisis and reveals her identity when Nina Einstein is threatened, trying to use her status to secure the release of other hostages. Lelouch, posing as the masked vigilante Zero, also meets her during this incident, and Euphemia is able to deduce his identity, but keeps quiet about it. When Cornelia asks her to choose a knight for her personal safety, Euphemia selects Suzaku, despite the political controversy this will cause. Cornelia is outraged by this and tells Euphemia that prejudice against Japanese is an established policy and that only the Emperor can change it, but Euphemia stands up to her and says she will do what it takes to change this policy regardless.

When she learns that Suzaku has been ordered to restrain Zero so he will be killed in a bombing, Euphemia takes control of a Knightmare and tries to get this order withdrawn in order to save both. They are then transported to Kamine Island, where she meets Lelouch and reveals that she knows who he is. She apologizes for how he and Nunnally were treated, and promises to keep his identity a secret. This allows her to reconnect with Lelouch and Nunnally. However, she starts to doubt herself when Suzaku tries to step down from service for deserting his duty (which he was forced to do by Lelouch's Geass). After a talk with Nina, Euphemia regains her confidence and contacts Suzaku while he's in the midst of battle, telling him she loves him. This motivates Suzaku to keep fighting and he manages to take down the enemy force with Lelouch's help.

Desiring to end the war and help Lelouch and Nunnally, Euphemia announces that she will create a special zone where Japanese will have equal rights. This runs contrary to Lelouch's plans, and creates political turmoil throughout Britannia, but her older brother Schneizel supports her (though for disingenuous reasons as he knows this plan will create opposition to Zero's cause). With the help of her aide Darlton, she also arrests some corrupt Britannian nobles who were profiting from the war.

When Lelouch meets her to discuss the situation, he tries to convince her that the plan is unfeasible, but Euphemia states that she has given up her claim to the throne for the sake of the plan, and confirms that she supports Zero and what he's trying to do. Lelouch admits that she has won, and only asks that he be allowed to work with her as an equal to improve the special zone, which she happily accepts. Tragically, Lelouch then loses control of his Geass, which turns an ill-advised joke into an order to "kill all the Japanese." Euphemia is horrified by this order and does her best to resist it, begging not to have to do this, but the Geass command overrides her personality and forces her to start a massacre, though she still fights it enough to spare Suzaku's life. Lelouch is forced to shoot her fatally to stop the massacre, and she is rescued by Suzaku and taken to the hospital. Upon seeing Suzaku, Euphemia is able to throw off the command entirely, and asks him what happened, as she can't remember what she did. Suzaku sadly tells her that the Zone was a success, and she dies happily.

She's probably the most admirable character in the show, having no prejudice or ill will to anyone, is pacifistic to the core, and only wants to bring peace to the world. She stands up for what's right and does all she can to reconcile with Lelouch and overcome the prejudice of the Britannians, and comes up with a plan to end the war and give the Japanese their freedom, and calmly rebuts Lelouch's arguments against the plan and convinces him to support it. She earns Lelouch's respect as a result and he admits that she was the only one who managed to beat him, as while acting with the best intentions, she managed to outmaneuver him politically and convince him that her way was better. Even after her death, she manages to redeem Suzaku in the end, as he's motivated to reconcile with Lelouch and stop the Emperor's Ragnarok plan because of his conviction that Euphemia of all people would not have wanted it.

None. While she's arguably too idealistic for the setting, it's not a corrupting trait at all. In her first appearance, she does smack a bully who was tormenting Suzaku, but this is justified because she was protecting Suzaku from potentially being harmed by him. Her massacre doesn't count because it was completely out of her control and she was horrified by the Geass command and tried to resist it for as long as she could, and she doesn't seem to even remember her actions afterward, showing she did not do it of her own free will.