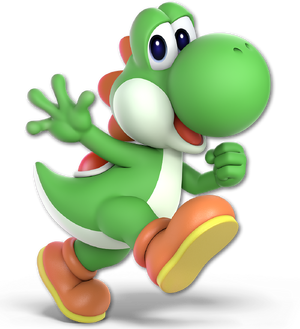 For this proposal, I'm nominating Yoshi from the Super Mario Bros. Series.

What is the Work?

The Super Mario Bros. series is essentially about Mario trying to thwart his archenemy Bowser from his numerous evil plans. In many cases, Mario must rescue Princess Peach, and often gets assistance from his brother Luigi and his "noble steed" Yoshi.

In a separate series effectively called the Yoshi series, Yoshi is the guardian of Baby Mario. They must travel to Baby Bowser's castle, where they must rescue Baby Luigi, who was kidnapped by Kamek, a powerful magi koopa and loyal servant to Bowser.

Who is He? What has He Done?

According to Super Mario World 2: Yoshi's Island, Yoshi is more or less the guardian of Mario, and has been his trusted friend since the red plumber was a baby (and thus technically means Yoshi is in fact older than the plumber as well).

Throughout many games, Yoshi has been shown to be virtually resourceful with a number of abilities, ranging from a prehensile tongue the is capable of shallowing a number of Bowser's minions as well as items, to the fact that he can jump very high via the flutter jump.

Like Mario, Yoshi is not afraid of facing baddies like Bowser, rather he is courageous, considering that he carried Mario across 6 worlds to help him rescue his brother Luigi.

Although determined to defeat Bowser, Yoshi is not arrogant, nonaggressive, and merciful, as he only fights Kamek's goons as it is the only way to advance to reach Luigi.

Like Mario, Yoshi has...an appetite. Yoshi is not afraid of eating enemies, but it is implied that they are not digested alive, as they reappearing the form of sentient eggs, which Yoshi can use as a weapon or tool.

I think Yoshi at least deserves to be mentioned, after all, Peach and Luigi were nominated and approved.

Retrieved from "https://hero.fandom.com/wiki/User_blog:Emeraldblade95/PG_Proposal:_Yoshi?oldid=1536256"
Community content is available under CC-BY-SA unless otherwise noted.