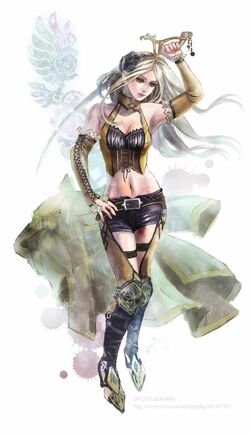 In light of Absolutionist's Reproposal of Aerith Gainsborough, I have decided to once again reevaluate a character I have previously proposed in the past.

This re-REproposal will once again focus on Celes Chere from Final Fantasy VI. The first proposal I made resulted in an inconclusive consensus, while the second proposal was approved...by one vote...the ONLY one vote on the proposal. In light of both of these disappointing results I have decided to make a third proposal to hopefully put this dilemma at a permanent end, that way Celes can finally be approved or rejected with a decent consensus.

Without further ado, here's the proposal.

What is the Work?

Final Fantasy is a series of role-playing video games dating back to 1987. In each of the games, the player takes control of a determinate number of characters that are part of a party (most often times four). While each game has different characters and plot lines, the mechanics and synopsis is generally the same: with the party members trying to stop a great evil. The plots themselves range from mundane (e.g. rescuing a Princess in FF1) to the more complex/intense (e.g. stopping an approved Pure Evil Villain from essentially destroying the universe).

The entry that I will be discussing is Final Fantasy VI (or Final Fantasy III as it is known in North America). Because the game is one of the more complex ones in terms of its storyline, I will fill you all in on the basic details of the game's story whilst mainly concentrating on Celes' story.

Final Fantasy VI, instead of being set in the middle ages like its predecessors, is set in a period roughly equivalent to the real-world's Second Industrial Revolution (roughly 1865-1900), with Steampunk influences and other period-style technologies and innovations. The in-game world is called the World of Balance, which consists of three continents: a North Continent with mountains; a South continent that is controlled by the antagonistic Gestahl Empire; and the East continent, which is so forbidding that it is infested by numerous hostile monsters. About midway through the game, an apocalyptic event caused by the game's main antagonist causes the continents to break apart and transform the World of Balance into the World of Ruin, causing the continents to split to numerous islands surrounding a larger landmass called the Floating Continent.

Like many role-playing games, there is an event frequently mentioned throughout the game that occurred before the in-game events. In this case, it is the so-called "War of the Magi", which according to dialogue, a trio a villains called the "Warring Triad" quarreled with each other, and used innocent humans as there enslaved soldiers by transforming them into magical beings called "Espers". Eventually, triad came to realize their mistakes, and corrected them by sealing away their powers into three statues and sealing them away from the realm of the humans. Following this event, magic began to fade away from society, becoming nothing more than legend and myth as the human realm began to embrace more realistic ideas, such as science and technology.

By the time of the game's events, the barrier that seals away the Esper realm from the Human realm has gradually begun to weaken in recent times, which has caused the antagonistic Gestahl Empire to take advantage of this series of events by capturing various espers and using them as a power source to power a craft called "Magitek" to combine magic with machinery and infuse humans with magical powers (whether willing or not).

The Empire is opposed by a group of freedom fighters known as the Returners (whose membership consists of the half-human, half-ester Terra Branford, the treasure-hunter Locke Cole, and the turncoat Celes Chere), whom wish to free the subjugated lands from the Empire's tyranny. The group is frequently at odds with Emperor Gestahl and especially his nihilistic jester Kefka Palazzo, the latter of which is the Emperor's right-hand man who later turns against the Emperor in an attempt to destroy the universe.

Who is She? What has she Done?

Celes Chere is introduced as a former general under Emperor Gestahl's army, who after questioning his corrupt empire and cruel practices, was imprisoned for treason and sentence to death. The Emperor subsequently replaces her position with Kefka, whom is more loyal with the Emperor's views (at least at the time). She is freed from her imprisonment by the Returners, where she begins to slowly develop feelings for Locke.

During the climax of the first half of the game, Celes and the Returners confront Emperor Gestahl and Kefka on the newly-raised Floating continent, but during the confrontation, the antagonists paralyze all the Returners except for Celes. The Emperor then offers Celes an interesting bargain, in exchange for turning over the Returners, he will clear Celes of all her crimes and offer her shared power in their cause. At this point in time, Celes was questioning her morality on whether to betray her friends or the Empire, but upon realizing that the Emperor and especially Kefka were willing to destroy virtually everything just to gain god-like powers, she ultimately sided with the Returners and attacks Kefka, but is unsuccessful, resulting in her and her colleagues being rendered unconscious and scattered across the World of Ruins; Kefka meanwhile kills the Emperor, wanting the god-like power for himself.

The second half of the game begins after a year passes in-game, Celes wakes up from her coma and finds that her life was saved by her friend and the late Emerpor's scientist Cid Del Norte Marquez. Cid reveals Kefka's plan to use the god-like powers he obtained from moving the statues of the warring triad to destroy all life (a factor evident by the fact that he is revealed to be the first prototype of the line of Magitek Knights, which has rendered him insane). Celes does her best to nurse Cid back to health (his fate is determinate on whether or not she gives him enough food).

Eventually Celes leaves Cid and regroups with the other members of the Returners. They then infiltrate Kafka's tower, and battle the statues of the Warring Triad, before confronting Kefka himself, who expresses how meaningless life is and why he wishes to destroy the universe. The Returners denounce his view, with Celes expressing how her feelings for her friends (especially Locke) have given her a reason to live. She and the Returners then battle the The Statue of the Gods as well as a transformed Kefka. They defeat the evil jester, and as a result, Kefka ceases to exist. The resulting battle also causes all esper-based magic to also fade away, but in turn also causes the world to rejuvenate back to its former glory.

As mentioned before (like in my previous proposals), Celes did in fact work with the corrupt Empire by serving as the general for some time, but she was always skeptical on its views of life and power, and when she felt that what the Empire was doing was wrong, she questioned them, resulting in her imprisonment in-game.

After being freed, Celes frequently questions her morality on whether to stay loyal to the Empire, or side with the Returners. She ultimately decides with the latter after learning about the Emperor's and Kefka's true intentions.

She does willingly try to kill Kefka during the first-half's finale, but I argue that this was justified, as Kefka was ultimately going to destroy all life in the Universe, including those of her friends as well as herself.

Celes is definitely the more unique of the game's three protagonists. Unlike Terra who is moreorless a straight heroine, and Locke, who is more along the lines of neutral rather than good in terms of alignment. Celes stands out because of the fact that she was moreorless a former villain-turned heroine, although as mentioned before she was never truly loyal to the Empire.

She has a tragic background, similar to characters I have previously proposed such as Sophitia Alexandra and Preston Garvey (both of which are under Pure Good respectively), but ultimately overcame her depression and suicidal thoughts after learning how important her friendship with the Returners and her love for Locke truly was, and unlike her archenemy Kefka, she has the opposite view of life, believing that while it may not be fair, there was always a meaning to live.

Though she was reluctant to help the Returners at first, she was willing to help them once Emperor Gestahl and Kefka showed no regards for life across the world.

I really hope that this proposal will be the last one I will have to make for Celes Chere, so as always I leave her fate in your hands everyone, hopefully you can settle this matter once and for all.