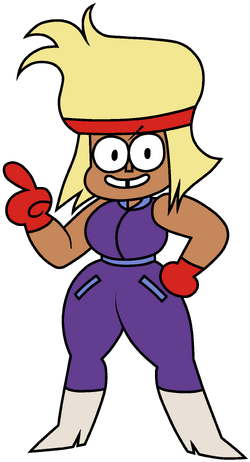 Hello everyone! I will be proposing Carol Kincaid from Ok K.O.!: Let’s Be Heroes.

The show focuses on a young boy named K.O. who wanted to become a hero.

Carol Kincaid is one of the main characters of the 2017 Cartoon Network animated series OK K.O.!: Let’s Be Heroes. She is the wife of Professor Venoumous, and the mother of K.O.

She married and dated Professor Venomous before the events of the series, who was a villain.

She crosses the Goodness Zone by always supporting her son.

She was upset that her son, K.O. after she told her about a fight against another kid's dad, but she calmed down when K.O. revealed that he was upset about how Chameleon Jr. revealed in having a powerful dad while K.O. didn't have one at all.

I would go with yes for her, as she is very supportive for her son and will always help him with anything.