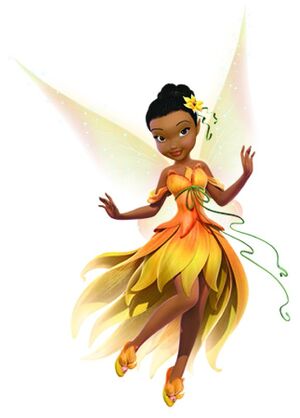 I'm going to do Iridessa as the 2nd Disney character I'm doing on PG Proposal.

Disney Fairies is an animated Disney franchise that is a spin-off of Peter Pan which takes place before the events of Peter Pan.

It is about a fairy named Tinker Bell who arrives in Pixie Hollow, located in Neverland where she meets tons of fairies and became friends with Silvermist, Iridessa, Fawn, and Rosetta.

Who is She? What has She done?

Iridessa is one of the main characters in the Disney Fairies franchise.

She is shown to be kind and loyal to fairies including her friend Tinker Bell who she befriended.

She helped Tinker-Bell during her adventures in Pixie Hollow and helped her stop captain hook in "The Pirate fairy".

Retrieved from "https://hero.fandom.com/wiki/User_blog:Invisible_Hover/PG_Proposal:_Iridessa?oldid=1958105"
Community content is available under CC-BY-SA unless otherwise noted.