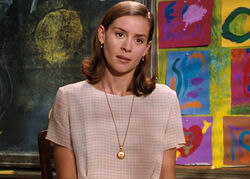 Hello everyone! So, I have watched the movie, Matilda, and I have thought I should propose two characters that might be good candidates for Pure Good.

Today, I will be proposing Jennifer Honey.

Matilda is a 1996 American fantasy comedy film that was based on Roald Dahl’s popular 1988 novel of the same name.

Like the novel, the film focuses on a young average girl named Matilda Wormwood who is stuck with a crude, distant father and mother named Harry and Zinnia Wormwood. However, when Matilda realizes she has the power of telekinesis, she begins to defend her friends from Trunchbull's wrath and fight back against her unkind parents.

Jennifer Honey Trunchbull (also known as Mrs. Honey)  is one of the main characters of Matilda, serving as the dueteragonist of both of the 1988 novel and 1996 film, Matilda.

She is niece of Agatha Trunchbull, and the teacher of Matilda, who became her adoptive-mother at the end of them.

Before the events of the events, it was revealed in one of the flashbacks that after she was given birth by her parents, her parents died while she was little with her mother died when she was only 2, and her father, being dead when she was 5.

Even since her father's death, She was abused by her aunt (Agatha Trunchbull) while living with her.

She crosses the Goodness Zone by adopting Matilda, and standing up to Matilda’s Parents.

Well, the only thing I can think of is that she and her class try to run her aunt, Agatha Trunchbull, out of the school. But this was only due to her being very abusive to her and her class, as unlike her aunt, she is very selfless towards children.

I would go with yes, as like Matilda, she is very friendly towards people including children. and Unlike her aunt, she does not have any corrupting qualities.