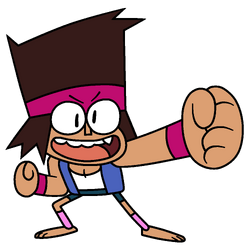 Hello everyone! I will be proposing K.O. from one of the popular Cartoon Network shows, OK K.O.! Let’s Be Heroes.

The show focuses on a young boy named K.O. who wanted to become a hero.

K.O. is the main titular protagonist of the animated franchise of the same name. He is the son of Carol Miller and Professor Venomous. Who wanted to become a superhero when he grows up.

He was upset and anger at the Plaza for treating him as a weakling, it was not enough to make him trigger T.K.O. He was also possessed/brainwashed by T.K.O. but he did felt remorse for the did he did despite being possesses.

I would go with yes for him.