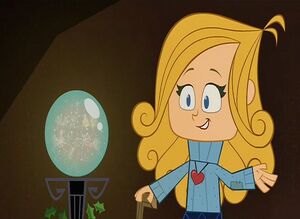 I thought I could do Sophiana as my first Pure Good Proposal.

Christmas is Here Again is a direct-to video film Christmas movie that was distributed by Renegade animation. Was directed by Robert Zappia, and written by him and Marco Zappia.

The Movie is followed by Sophiana, an orphan girl, who sets out to find Santa's sack which Krad stole, as she, Paul Rocco, Dart, Buster, and Charlee went to get it back from Krad and return it to Santa.

Who is She? What has she done?

Sophiana is the main protagonist of the direct to video Christmas is here Again. She, is an orphan girl who uses a cane. She used to have parents until they died in a car crash, which caused her to go to the orphanage that was ran by Miss Dowdy.

Sophiana was bullied by some of the children while she was helping Mr.Caterpillar before she fell down in the snow.

She is shown to be kind and nice to others, including her friends. She also helped people like she did for Mr.Caterpillar.

She went to go on a journey along with Paul Rocco (an elf), Dart (a reindeer), Buster (a fox), and his friend Charlee, a polar bear where they went to retrieve Santa's sack from Krad and defeat him, and went to give Santa his sack back after defeating Krad.

She has no corrupted factors.

Retrieved from "https://hero.fandom.com/wiki/User_blog:Invisible_Hover/PG_Proposal:_Sophiana?oldid=1928577"
Community content is available under CC-BY-SA unless otherwise noted.