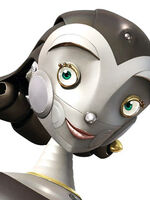 Hello everyone! since Rodney Copperbottom was approved, I will be doing Cappy as one of my three candidates from the Blue Sky Studio film, Robots.

The film follows In a world of sentient robots, where a striving young inventor named Rodney Copperbottomwants to work for the avuncular Bigweld , whose Bigweld Industries makes spare robot parts. But Bigweld has just been deposed as company head by the villainous Phineas T. Ratchet, who wants to make all robots submit to profitable forced upgrades. Rodney and his friend Fender must go underground to fight Ratchet's evil plans.

Cappy is the duetragonist of the 2005 animated adventure comedy film Robots.

She was a former employee and worker to Phineas T. Ratchet, and the love interest of Rodney Copperbottom.

Like Rodney, She had the same past but is similar, where she was just another robot who was made and created of spare parts and having underpriveleged parents - her father was a vaccuum cleaner and her mother had a set ofattachments. And during her early days at Bigweld Industries, someone (who was most likely Ratchet) forced her to trade all of her old parts for upgrades to get a better position at her job.

Sometime during the film, she would then rescue Rodney and Fender. Later, she helped Rodney go to Bigweld Industries to help Bigweld and tell him about what Phineas T. Ratchet is planning on doing, however, Rodney oeaves Robot City after Bigweld tells him to give up his own dreams.

During before the end of the movie, Cappy teams up eith the group (including Rodney and Fender) on defeating Madame Gasket and her army.

She does crosses the Goodness Zone where she rescues both Rodney and Fender.

Well the only corrupting factor that is corrupted at least is that she was working for Phineas T. Ratchet (the villain of the film), but unlike him, she is very friendly and caring towards others as she is willing to help them.