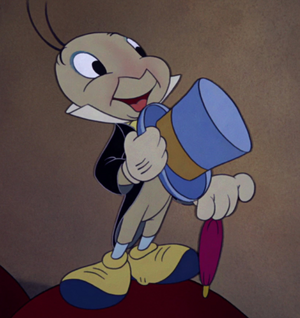 Hello everyone! I will be doing Jiminy Cricket from the 1940 Disney animated film, Pinocchio.

Pinocchio is a 1940 Disney fantasy film that produced by Walt Disney Productions, and which is based on the 1883 Italian children's novel "The Adventures of Pinocchio" by Carlo Collodi.

The film focuses on a wooden puppet named Pinocchio where Before falling asleep, Geppetto (the one who created and named him), wishes on a shooting star by saying that he wished Pinocchio would be a real boy. During that night, a Blue Fairy then visits the workshop and brings Pinocchio to life, although he remains a puppet. She then informs him that if he proves himself brave, truthful, and unselfish, he will become a real boy and assigns Jiminy to be his conscience.

Jiminy Cricket is the deuteragonist of the titular movie "Pinocchio". He is a anthromorphic friendly cricket who becomes Pinocchio’s conscious.

He first appears in the film where he is travelling through an unnamed village. When Jiminy overhears Geppetto's wish for the puppet to be a real boy, but brushes it off as impractical, though lovely. Jiminy later watches in amazement as the Blue Fairy brings Pinocchio to life. After a conversation with the fairy, Jiminy is appointed to be Pinocchio's conscience, as Pinocchio must prove himself worthy of being made a real boy. Jiminy then started to teach Pinocchio to whistle so that Pinocchio can call him.

In the morning, Gepetto sent Pinocchio to school with an apple to give to a teacher, as Jiminy followed him, until he noticed and realized that he is with Honest John and Gideon going to Stromboli’s musical theatre, which would then cause Pinocchio and Jiminy going on a journey with Gepetto looking for his son.

He crosses the Goodness Zone where helped save Pinocchio by finding him and escaping with him after noticing that all the boys were turned to donkeys.

Here are a few of these I can think of, When Honest John and Gideon tricked Pinocchio into having him being part of Stromboli's show, Jiminy was angered even though he did had the right to since Pinocchio didn't listen to him about going to school. And just the second and last one was When Honest John and Gideon (again), tricked Pinocchio into going to Pleasure Island (which this time is only because they had to do it under The Coachman's orders, and also there fear of him) where All naughty children have fun there, where they can do everything they want except there unaware that the beer, cigarettes, and something else can turn them into donkeys, which happened to all of them (excluding Pinocchio and Lampwick), although off-screen. When Jiminy sees Pinocchio again, where he is playing pool while he's drunk (due to smoking a cigarette), Jiminy gets mad at Pinocchio again which was only because he didn't listen and was tricked agaim.

But despite this, he did tried to free Pinoke when he was locked in a cage by Stromboli. Also, as he was about to leave Pleasure Island, he then notices a bunch on donkeys who are the same boys who went to pleasure island, and almost every boy who can't talk was sent in a crate to places such as salt mines or circuses (except for some that are able to talk). After realizing that they donkeys are the same boys who just went to pleasure island, he tries to find Pinocchio and then started running away to prevent anyone on seeing them.

I would say a yes for him.