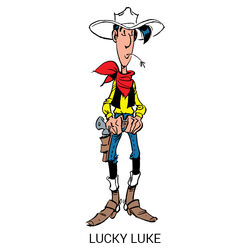 Hello everyone! So, remember I wanted to propose this guy last year before my other profile was removed? Well, I will now be proposing Lucky Luke today!

Lucky Luke is a a Franco-Belgian School Western comic book series created in 1946 by graphic artist Morris, who at first did both art and writing.

The series takes place in the American Old West of the United States. It stars the titular Lucky Luke, a gunslinger known as the "man who shoots faster than his shadow", and his intelligent horse Jolly Jumper. Lucky Luke is pitted against various villains, either fictional or inspired by American history or folklore.

Lucky Luke is the titular main protagonist of the western Belgian animated franchise of the same name.

He is a brave and lone cow-boy who was known as being the fastest shooter in the Wild West, while being able to outdraw even his own shadow. He is also the archenemy of The Daltons.

Mostly by always defeating the Daltons, saving people, and helping them.

Well, the only only that Luke has is outright telling Joe he'll never forgive him if he actually hurts Rantanplan, but despite that, he only does it whenever someone mistreats Rantanplan, showing he cared for him. But despite that, Luke doesn’t really have none, because despite working for himself, he is very friendly and always helps people.

Go with yes for him, as this hero is very friendly as he is always there to save, help, and even team up with people.