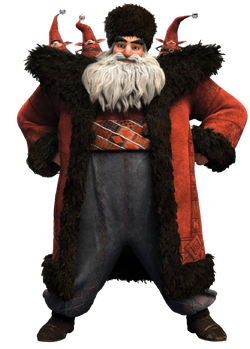 Hello! Since Sandman got approved, I’ll be doing Nicholas St. North as my third and last character from Rise of the Guardians franchise.

Generation after generation, immortal Guardians like Santa Claus, the Easter Bunny and the Tooth Fairy protect the world's children from darkness and despair. However, an evil boogeyman named Pitch Black schemes to overthrow the Guardians by obliterating children's belief in them. It falls to a winter sprite named Jack Frost to thwart Pitch's plans and save the Guardians from destruction.

Nicholas St. North (who is also known like many other versions as Santa Claus) is the duetragonist of the 2012 Animated DreamWorks film Rise of the Guardians. He is the Guardian of Wonder, and Santa Claus who lives in the North Pole and sends presents and gifts to children on Christmas. He is also the leader of the Guardians.

He first appeared in the film, where he was sculpturing the toys from ice before he was interrupted by one of his Yetis.

He then told the Guardians about Pitch Black returning, as he would then kidnapped someone named Jack Frost sometime during the film to have him help the guardians. After kidnapping Jack and bringing him into the North Pole, He introduces Jack to the other Guardians to Jack, as they told Jack that he was chosen as a Guardian by The Man in the Moo, but Jack refused.

He tells then tells him that he must have something special if the Man in the Moon choose him as a Guardian and explained to him about his center.

North Then starts to think fast as he comes out with a plan of collecting the teeth, with Jack Frost aboarding the Guardians on starting their quest.

North was able to wake up, as he brings both Bunnymund and Tooth to help both Jack and Sandy against Pitch in order to stop him. Soon after Jack and Sandy were battling Pitch and his nightmares; North, Bunnymund, and Toothiana joined in but as the battle heats up, Pitch's Nightmares surrounded Sandy while Pitch took the opportunity to stab him, turning The Sandman into sand. This angered Jack, as he charged at Pitch and creates an ice wave destroying the Nightmares.

During the funeral, North encouraged Jack to not give up and that Sandy would have been proud of him. Knowing that they still can turn things around, the Guardians decided to help Bunnymund with Easter. North then admitted to him that for the first time Easter was more important than Christmas. He then announced to the guardians about going in his sleigh but Bunnymund said to him that since it was his warren, he gets to choose the way to travel, opening an tunnel under everyone feet.

As the Guardians and the children started celebrating, North asked Jack about his center and Jack revealed he has figure it out. North gave Jack a gift of a small Nesting Doll which revealed that North always knew Jack's center was fun and soon he took place in the snowball fight after Caleb, Claude and an elf hit North with a snowball.

After Pitch was taken away by his own Nightmare creatures, North asked Jack if he wants to make it official and the Guardian ceremony was performed again. Jack looked at Jamie which caused him to nod. Proud of himself and of Jamie, Jack says, "I will," making him an official Guardian. North is later seen at the end of the film where he is waiting for Jack in his sleigh while he said his goodbye to Jamie. He also welcomed Jack as the new Guardian as the sleigh started to take flight.

let's see if he passed the Admirable Standard.

He crosses the goodness zone by Encouraging Jack not to give up.

earlier in the film, he was a little bit rude towards the elves and initially has the attitude of Christmas being more important than Easter. Those were the only corruptive qualities he hadd. Unlike Bunny, He, Sanderson, and Toothiana are very friendly and supportive towards Jack Frost.