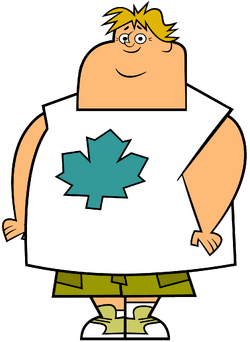 Hello everyone! I have been discussing with the users on the Heroes Wiki Server if any other characters, besides Bridgette, DJ, Zoey, and Dawn from Total Drama qualifies for Pure Good.

So, as a response, one of the discord hero users suggested that Owen, and Mike might qualify.

Total Drama is a 2007 comedy drama adventure franchise which is based on Survivors.

The franchise focuses on an island that spoofs survival programs by recounting the misadventures at Camp Wawanakwa, an island retreat where 22 teens compete in extreme challenges while vying for the $100,000 grand prize. Every three days, at a campfire ceremony, the host passes out marshmallows to players who are safe. The sad camper who doesn't get a marshmallow must walk down the Dock of Shame to the Boat of Losers, which will bear him back to his mundane life.

He was one of the original contestants of the first generation, who was in Island, Action, and World Tour as a contestant. During Total Drama Island, he befriended most of the campers as Friends, and always had fun during the challenges. In Action, he helped the contestants on Movie Projects, and Challenges, while guest-starring on Aftermath. In World Tour, he joined the contestants on joining the World Tour, while exploring the world,

Owen was of the most likable characters in-universe, as he was a friendly constant who befriended the contestant campers as his friends, helped them, and even befriended any of them who are sometimes his enemies.

Bridgette: She is a surfer who is Geoff’s Girlfriend as one of the original contestants from the first generation, who was the only one who befriended Courtney. She encouraged

DJ: He was one of the original contestants, who is one of Owen’s friends, he is an animal lover who deeply loved Animals, he is always helping the other campers. He does not start conflicts with other campers and gets along well with just about everyone he encounters, and he also lacks corrupting qualities that the other campers have.

Zoey: She was one of the contestants from the second generation on Total Drama, who is the girlfriend of Mike, and the rival of Anne Maria, who has helped her teammates and was also saving Mike from Mal.

Dawn: She was one of the contestants from the second generation on Total Drama, who has helped the contestants. Despite her unconventional characteristics, short duration on the show and coming across as creepy to others, Dawn is actually kindhearted and helpful, as she is helpful towards her teammates.

Owen crosses the Goodness Zone by helping his teammates, teaming up with Tyler, Cody, and DJ on hunting down the Million Dollars, and supporting on Cody on stopping Alejandro.

I would go with yes, as like Bridgette and DJ, who was one on the contestants who was friendly enough to befriended campers, and even helped them.