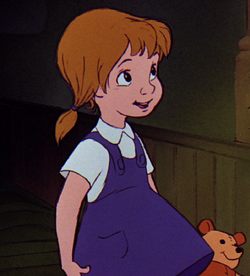 Hello everyone! I thought that maybe I can do Penny to see if she can qualify like Cody from The Rescuers: Down Under. This will be my first time I’m proposing  a character from a Disney Animated Canon film.

The film focuses on a duo couple named Bernard and Bianca, who are sent to rescue a shy orphanage girl named Penny, who was kidnapped by Madame Medusa so she can get the diamond to become rich.

Penny is one of the main characters of Disney's 23rd full-length animated feature film, The Rescuers, serving as the duetragonist of the film.

She is a young friendly little orphan who was sent to an orphanage after both of her biological died.

While she is living with Mr. Snoops, and his pet crocodiles Brutus and Nero, she was then sent by him and Medusa to find the diamond from the Big Bayou’s cave, after she was threatened to not get her teddy back if she doesn’t find the diamond. After giving Medusa the diamond, she instead takes both her and snoops, as she threatened both of them that they will be blasted and killed if any of them tried to follow her, Penny then reminds her that she promised to give her teddy bear back, as Medusa walked away to escape, she falls over, as Snoops,p and Penny tried to take the diamond away from her, with penny escaping from her.

After escaping from Medusa, Penny finally gets adopted by her adoptive parents from the orphans as she thanks both Bernard and Bianca for Rescuing her,

Well, the only ones I can at least think of are this:

I say that she can qualify like Cody, since she is a friendly little child.