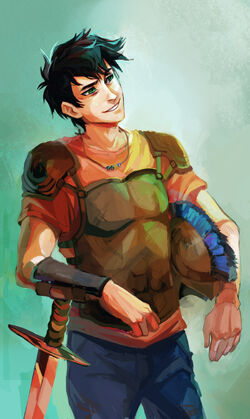 Hello everyone! I thought I can propose this hero, Percy Jackson from Percy Jackson: and the Olympians, but only the book version. I will try to see if he qualifies just Like Stanley Yelnats IV and Roy Eberhardt. This one will be my third character I’m proposing from both a novel and film.

The book focuses It on a demigod teenage boy named Percy Jackson who is the son of Sally Jackson and Poseidon.

Percy Jackson is the main titular protagonist character of the fantasy adventure book franchise and movie franchise of the same names.

He is a young  eighteen-year-old teenager who is a demigod, and the son of Sally Jackson and Poseidon.

Let’s check if he passes the Admirable Standard.

By advising Annabeth to give living with her fathe and step-mom, and forgiving her, and standing up to his step-father Gabe.

Well, so in Percy Jackson: The Lightning Thief, he gets framed by Luke for stealing a lightning, even though he barely even stole it.

Go with yes, as like Stanley, and Roy Eberhardt, he definitely stands out as he is always there to help people.