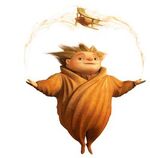 Hello! Since Toothiana got approved, I will be doing Sanderson Mansnoozie also known as Sandy as the second character I will be proposing from Rise of the Guardians.

Generation after generation, immortal Guardians like Santa Claus, the Easter Bunny and the Tooth Fairy protect the world's children from darkness and despair. However, an evil boogeyman named Pitch Black schemes to overthrow the Guardians by obliterating children's belief in them. It falls to a winter sprite named Jack Frost to thwart Pitch's plans and save the Guardians from destruction.

WHO ARE HE? WHAT HAS HE DONE?

Sanderson Mansnoozie (who is also known as Sandy) is one of the major characters of the 2012 animated film Rise of the Guardians.

Before the events of the film, Sandy and the rest of Guardians were chosen by the Man in the Moon to protect the world's children.

After he accidentally woken a boy named Jamie, Sandy tries to put him back to sleep in his bed but, however, he accidentally inadvertently puts Both Tooth, Bunny, and North to sleep as well. Jack sees a nightmare pass by outside and flies off to follow it, with Sandy at his heels. The nightmare leads Jack and Sandy to Pitch. The Sandman quickly starts to attack and proves himself a superior fighter. However, Pitch calls his army of nightmares, and during the ensuing battle, Jack and Sandy are separated. Despite the other guardians returning in time to help Jack, Pitch manages to overwhelm Sandy with nightmare sand, and as he throws one last glare at the Boogeyman, Sandy is killed. As believe and hope in the guardians diminish, Jamie and his friends refuse to give into fear. This resolution, combined with the children's belief in the guardians, are enough to turn Pitch's nightmare sand back into dream sand and revive Sandy. The Sandman promptly vanquishes the Boogeyman and is welcomed back by his friends.

Saving the world from Pitch Black.

He doesn’t have any because unlike Jack Frost, and Bunny, he has no corrupting qualities.