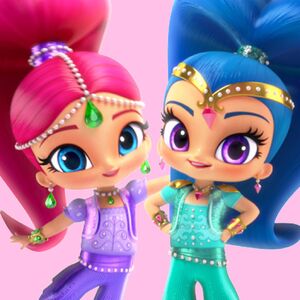 I will be proposing Shimmer and Shine from a Nick Jr. animated series.

Shimmer and Shine is an American animated television series, that was created by Farnaz Esnaashari-Charmatz.

the story focuses on a young girl named Leah who is friends with a pair of two genie sisters named Shimmer and Shine. Each day, the genies grant Leah three wishes, but they often make mistakes. In Season 1, the story is set in the human world, where Shimmer and Shine give wishes to Leah.

WHO ARE THEY? WHAT HAVE THEY DONE?

Shimmer and Shine are the main titular protagonists on the Nickeloden animated series of the same name.

They are the twin genie sisters who are friends with Leah who would grant her three wishes in almost every episode, until a the problem starts happening, with one of them trying to help fix the mistakes near the end of any episode, with the episode having any learning lessons about any mistakes that happened.

While most of their past is unknown, what is known is that they were born, and lived in Zahramay Falls to both unknown parents. Sometime the events of the series, Leah would find a magic genie lamp, where she would then meet both Shimmer and Shine, as she befriended them while trying to grant three wishes.

They crossed the Goodness Zone by saving Zeta.

Well, they do sometimes make mistakes usually when they make three wishes for Leah, but like Leah, they lack corruptive qualities.

I would go with yes for them.