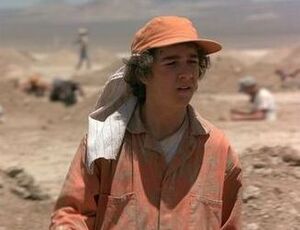 Hello everyone! Okay, I watched this movie of Holes last year on Disney+. So, I thought I can propose Stanley Yelnats IV from Holes, to see if he qualifies, but I do know he does.

This will be my first time I’m proposing a character from a film that is based on a novel.

Holes is a young adult novel written by Louis Sachar and, published by Farrar, Stratus, and Giroux.

The novel focuses about an unlucky teenager named Stanley Yelnats iV who was sent to Camp Green Lake, a juvenile facility in a desert in Texas for stealing a pair of shoes.

Stanley Yelnats IV is the main protagonist of the 1998 book novel Holes, and its movie title film of the same name.

The duo investigate the hole where Stanley found the lipstick and discover a chest buried in the ground. Walker, Mr. Sir, and Pendanski find him and Zero and demand that they give the chest to them. The hole is swarmed with yellow-spotted lizards, preventing the adults from taking the chest from Zero and Stanley. They soon realize that the warden, who is a descendant of Charles Walker, was using the inmates to dig for Kissin' Kate's treasure.

During the next morning, the attorney general and Stanley's lawyer arrive to pick up Stanley. Still in the hole, Zero reads the name on the chest and finds that it belongs to Stanley's great-grandfather. Stanley and Zero are released and Walker, Mr. Sir, and Pendanski are arrested. It rains in Green Lake for the first time in over 100 years.

At the end of both the film and book, Stanley gets freed, he and Zero are released. With Walker, Mr. Sir, and Pendanski are arrested.

The Yelnats family claims ownership of the chest which contains jewels, deeds, and promissory notes. They split the contents of the chest with Zero, who uses it to hire private investigators to locate his missing mother. Stanley's

Well, here are three corrupting factors Stanley has had in both the film and novel.

Go with Yes, as despite being friendly, he is very supportive to his friends and was even willing to find Zero, even if it means he will be written out by Louise Walker.