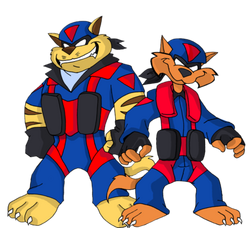 Hello eveyronr so, I thought about proposing the SWAT Kats (Jake “Razor” Classon and Chance “T-Bone” Furlong) from one of Hanna-Barbera’s show of the same name.

SWAT KATS: The Radical Squadron is a 1993-1994 American animated television series created by Christian and Yvon Tremblay and produced by Hanna-Barbera Cartoons.

The series focuses on two vigilante pilots named Jake Clawson (Razor), and Chance Furlong (T-Bone), who were members of Megakat City's paramilitary law enforcement agency, which was also as the Enforcers. They were discharged from the Enforcers after disobeying the orders of Commander Feral, which resulted in the destruction of the newly built Enforcer Headquarters. While in pursuit of Dark Kat, the ruo rebelled against Enforcer Commander Feral's orders to fall back and leave Dark Kat to him. When they objected, citing their already-acquired target lock, Commander Feral crowded out their jet, clipping their wing and sending Jake and Chance's jet crashing into Enforcer headquarters. The resultant explosion distracted Commander Feral, allowing Dark Kat's escape. The Commander took no responsibility for the incident, discharged Jake and Chance from the Enforcers and reassigned them to work at the city's military salvage yard to pay for the damage to the Enforcer Headquarters which Feral caused.

WHO ARE THEY? WHAT HAVE THEY DONE?

The SWAT KATS (also known as Razor and T-Bone) are the main titular characters of the 1993 Hanna Barbers animated series, The SWAT KATS: The Radical Squadron.

They are two vigilante pilots named Jake Clawson (Razor), and Chance Furlong (T-Bone) who help save the city from evil, such as Dark Kat, or Viper.

While most of there Early life past are unknown, what is revealed is that they were members of MegaKat City's militarized police force called the Enforcers that are led by Ulysses Feral, a rude, inflexible, and incompetent person. While in pursuit of Dark Kat, Jake and Chance disobeyed Feral's orders to leave Dark Kat alone since he wanted to take credit for defeating him in front of the media. When Chance objected since Jake already had Dark Kat locked for target, Feral knocked Jake and Chance's plane into Enforcer Headquarters allowing Dark Kat to get away. Feral, angry and not wanting to face suffering from the media, forced Jake and Chance to work in the salvage yard to pay for the damages that he caused and discharged from the Enforcers.

They crossed the goodness zone by saving the city from evil, helping people, and teamed up with Molly to save Mac.

They only corrupting qualities they have are sometimes arguing, they also accidentally destroyed their command headquarters and caused sizeable amounts of damage while in pursuit of a criminal, but despite that, it was only an accident as they did felt guilt about it.

I would let you guys choose if they qualify, but I think that they can qualify since they do save the city from evil.