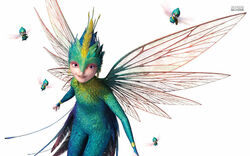 Hello everyone! I will be doing Toothiana as one of three characters I will be proposing.

Generation after generation, immortal Guardians like Santa Claus (Alec Baldwin), the Easter Bunny and the Tooth Fairy protect the world's children from darkness and despair. However, an evil boogeyman named Pitch Black schemes to overthrow the Guardians by obliterating children's belief in them. It falls to a winter sprite named Jack Frost to thwart Pitch's plans and save the Guardians from destruction.

Toothiana is one of the major characters of DreamWorks 2012 animated comedy film Rise of the Guardians. She is one of the guardians, who is the Tooth Fairy, the sister of Vanish, and the love-interest of Jack Frost.

In the film, Toothiana was first shown in the film where her palace, giving orders to her fairies. While admiring a child's first lost tooth, she notices the aurora, the sign for the Guardians to assemble, and flies off to the North Pole.

After hearing that the trouble is happening at her palace, She rushes to Asia, but arrives to late, when one of Pitch's monstrous nightmares have stolen her collection of children's teeth, and kidnapped her fairies, except one who Jack managed to save, Baby Tooth. The other Guardians help the fairy queen by joining in her duties. Though this plan works mostly well, the Guardians are all weakened anyway following children's losing faith in Bunny. After Pitch Black was defeated, Tooth gives the Boogeyman a quarter before punching out one of his teeth in retaliation for stealing her fairies.

Tooth joyfully embraces with Jack, but they are interupted by Baby Tooth.

The only corrupting quality she has is scolding Bunny for saying hurtful things to Jack, but that cannot count as one as she did it when he was acting mean to Jack.