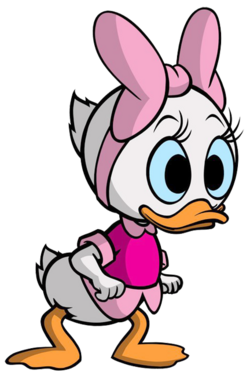 I will be doing Webby Vanderquack from the original series.

DuckTales is an 1987 American animated series that was distributed by Disney, and aired on Disney Channel.

When Donald Duck decided to join the US Navy, he enlisted his uncle, Scrooge McDuck,to look after his nephews, Huey, Dewey, and Louie. Although reluctant to do so due to their hyperactivity, along with his continual pursuit of increasing his wealth and maintaining harsh business ethics, he eventually warms up to them upon seeing how smart and resourceful they are and takes them into his manor as well as several adventures.

Webbigail “Webby” Vanderquack (who is mostly known as Webby) is one of the main characters of the 1987 Disney animated television series DuckTales.

Wendy is the granddaughter of Bentina Beakley (the maid and friend of Scrooge McDuck), who becomes the friend of the triplets (Huey, Dewey, and Louie) after Scrooge was enlisted by his Donald Duck to take care of the triplets.

While her past of her past is unknown, and the series didn’t explain, revealed, nor hinted about what happened to Webby’s parents, it might presumably implied that they were on vacation, and what was known is that she was somewhat sent to live with her grandmother, Bentina Beakley.

By Forgiving the Beagle Babes, and also helped saving the animals.

The only corrupting quality she had was becoming a criminal on joining The Beagle Babes, but this was only playing.

I would go with yes, as like her Reboot counterpart, she is very friendly towards people including her enemies.