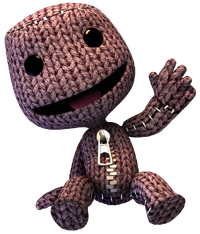 LittleBigPlanet is a PlayStation-exclusive video game franchise created by Media Molecule that prides itself in allowing the player to create any level they want. The player takes the role of Sackboy, and through him, they can create whatever they want on their Moon. The story modes of each game feature Sackboy saving Craftworld (and in some cases, other worlds), from a threat, ranging from getting the Creator Curators to the festival (LittleBigPlanet PSP) to saving Craftworld from an external threat so destructive and powerful it could potentially end Craftworld as anyone knows it (LittleBigPlanet 2). The attack from the Negativitron was so powerful, it became the most referenced event in the entire franchise.

Who is He? What Has He Done?

In the "Move Pack", he rescued the Sackbots and Victoria from the Cakeling. In the "Cross-Controller Kit", he frees a trio of pirates from prison and prevents Warden Crumb from destroying their treasure. In "The Journey Home", he aids Larry Da Vinci in inviting characters from the two prior mainline games to a welcome-home festival for Sackboy.

Like most video game characters, Sackboy does kill his enemies. However, it is only in self-defense as he does have to keep himself alive in order to save Craftworld. Notice how the only enemies he ever kills are lethal enemies. Not to mention, he immediately forgives villains if they redeem themselves and stop being a threat. He doesn't try searching out villains to kill them if they aren't immediate threats, and he doesn't hold grudges.

In many of the tutorials, Sackboy shows a humorous and playful side in the tutorials. However, they don't detract from his heroism in Story Mode. He does however show slight sadism in some of the tutorials related to hazards, especially towards the danger they put the Crash Test Teddy object through in LittleBigPlanet 2. However, Sackboy is most likely acting in order to show the players how to use the hazards, not to mention, they are just objects, not sentient living creatures. Of course he wouldn't show this sadism in Story Mode if he saw any character get killed in front of him or subject to danger. It would be out of character for him to show this sadism in Story Mode.

Finally, there is the Cross-Controller Kit, in which he does many questionable actions. He frees the pirates from prison and aids them in getting the treasure from the Planet of Dubloon. He helps steal a ship to get to Dubloon and later, when the pirates finally capture Warden Crumb, Sackboy watches without any remorse as they activate the escape pod Crumb is in for him to not be found for many years. However, this is probably a case of character assassination. Sackboy doing these actions is very out of character for him to do, and there is no way he would do this in the mainline games or their spin-offs. Makes sense as this was Sumo Digital's first work in the franchise. I mentioned in the lead that there are some works that have a disputed canonicity. Because of Sackboy's out-of-character actions, the characters in the Cross-Controller Kit never appear again, and the fact that this is the only non-licensed DLC to not be related to the Story Mode in any way, I consider this DLC one of these disputed-canon works.

Edit: I have been neglecting to mention this and now have the chance add this. Player choice should not be an issue here. Each game has a story mode, each of which has a defined plot. Sackboy has a defined personality, even if he is meant to be a player avatar and is mute. His personality of being brave and selfless has been shown since LittleBigPlanet 2, which was the first game in the series to introduce cutscenes. Therefore, player choice should not even be an issue in this case, even if Sackboy is meant to be a player avatar.

This one is easy. In Sackboy's first appearance, he crossed the Goodness Zone when he rescued the characters from the Collector. However, in the overall franchise, the moment he crossed the Goodness Zone was when he saved Craftworld from the Negativitron and his plan of complete annihilation. Most of the games have Sackboy saving Craftworld or other worlds from a major threat. He is also one of the most nicest characters in the franchise. He is the only character in the Alliance to not really have any flaws (Larry is short-tempered, Victoria is insecure, Clive is depressive, Avalon is egotistical, Eve is self-absorbed, and Herbert is foolish). Vex even says that the reason why he dropped the plans near Sackboy is because he knew Sackboy was so pure that he would try to use the plans to stop Vex, inadvertently bringing him the Dreamer Orbs.

Sackboy seems to be a good candidate for being Pure Good, but I digress. What do you and the community think?