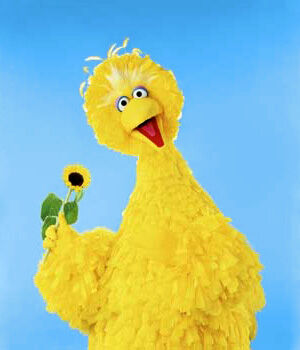 Sesame Street is an educational television program designed for preschoolers, recognized as a pioneer of the contemporary standard which combines education and entertainment in children's television. Sesame Street also provided the first daily, national television showcase for Jim Henson's Muppets, an act he'd been performing since the 1950s. The series is produced by Sesame Workshop, formerly known as the Children's Television Workshop (CTW), and has now aired over 4,500 episodes. It is one of the longest-running shows in television history, and in 2019, the series celebrated its 50th anniversary.

Who is the Candidate/What Have They Done?

Big Bird is a major character from Sesame Street, having appeared since the show's debut in 1969. He is an 8-foot, 2-inch yellow bird of an unknown species, but he is only six years old.

Despite his large size, Big Bird stands out at being very sweet and caring, always trying to help others, Big Bird helps children feel all right about not knowing everything and teaches other life, alphabet and numerical lessons.

Big Bird was also friends with the human character Mr. Hooper, who made his birdseed milkshakes, until the actor of Mr. Hooper passed away, which also led to Mr. Hooper passing away in the show. Big Bird's acceptance of his death has been hailed as a milestone in children's programming.

He has a hard time standing up for himself - he once let Humphrey and Ingrid talk him into giving Radar to Natasha, and he would have lost his nest to Minnie Myna if Chris hadn't helped him. However, this is likely due to how young and naive he is and isnt really anything major anyways.

As i stated before. Big Bird is a sweet and understanding young bird that just likes to help and care for the people around him. And outside that moment with Humphrey. He has zero corrupting factors.

I'd say yes but the people of the wiki get to decide, not me.