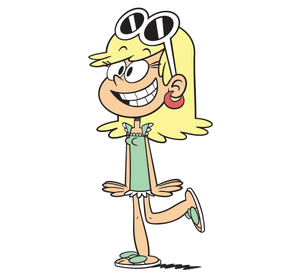 My first removal . Lets do this

Who is the Hero?

Leni is a 16-year-old girl who is a slow-witted and very moronic girl who lacks intelligence but makes up for it with heart. Her most annoying habit is saying "like." She uses a vacuum cleaner and is terrified of spiders. She is skilled at lockpicking and also woodcarving as well. In addition, she is an excellent party planner, since she earnestly listens to people, thinks about them, and knows what they like (Though she can have a tendency to ruin the surprise of parties by prematurely blabbing them to the ones they're being thrown for)

Why Doesn't the Hero Qualify?

Leni has shown to be incompetent as a result of her very low intelligence. For example in "No Spoilers" The children decide not to tell her about their mother's upcoming party because Leni has a history of spoiling surprises.

"Heroes who are more likely to accidentally foil their own plots (Lets say The Party as a example) than the ones of villains they're fighting against, due to stupidity, bumbling, poor planning, cowardly behavior, weak strength or willpower, arrogance and/or unwillingness on their part."

Leni is also prone into getting in in fights with her silblings for petty and stupid reasons as seen in "Brawl in the Family" when she and Lori buy identical dresses and as a result they get into a fight because of it.

I'd say cut but the people of this wiki have more power then i do, so choose wisely my friends.