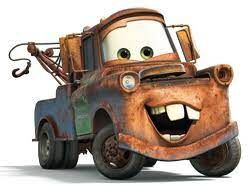 Hello, everyone! I wanted to make a proposal about Mater for a long time. Mater has always put me as at least Rejected Good Material, and I’ve been wanting to make a proposal about since I joined the wiki. Since this is my first, it may not be the most well written proposal you’ve ever seen. Also, thank you AlexHoskins for giving me permission to do this proposal,

Cars is a 2006 Pixar franchise directed by John Lasseter (Brian Fee in the third movie), and the last Pixar franchise created before it was purchased by Disney. It stars the voices of Owen Wilson, Larry the Cable Guy, Bonnie Hunt, and more.

Who is Mater? What does he do in his franchise?

Mater is the deuteragonist of the Cars franchise. He is a major character of Cars, the protagonist of Cars 2, a supporting character in Cars 3, and a main character in Cars Toons and the upcoming series. He is voiced by the famous comedian of Larry the Cable Guy. He is Lightning’s best friend, Holley Shiftwell’s boyfriend, and the arch nemesis of Sir Miles Axlerod and the lemons.

He is the protagonist of this film. Here’s the stuff he does in this film: He helps a malfunctioning car and takes him to Ramones for him to get fixed. He defends Lightning from Francesco’s insults. After everyone thinks that he’s spilled oil, he goes to wash himself up. He helps Finn and Holley defeat Lemons, who are very villainous cars. He feels genuinely hurt when Lightning got mad at him for something he didn’t do on purpose. He, throughout the movie, helps defeat Lemons. He sometimes uses great intellect during the movie, like identifying the engine. He helps make Tomber give them the information. He looks back on his personality and antics, and starts to try to change for the better. He multiple times tries to tell the truth that he’s not a spy, but it fails. He feels bad about having to be in disguise, because it’s lying, technically. While he destroyed an entire room of the Lemons base, he didn’t mean too, and felt bad about it. He saves Lightning throughout the film, even after what Lightning said to him. He save Holley and Finn from dying in Big Bentley. When he thinks Lightning is dead, he gets very sad and blame himself for it. He gets everyone out of Lightning’s pit, because he thought there was a bomb in it, so they don’t die. He helped stop Professor Zündapps plan. He exposed Sir Miles Axelrod to everyone.

He is a supporting character in this film. He supports Lightning McQueen throughout everything.

He has some, but they’re mostly due to him not be the smartest, and can be overlooked. Here are some. He played some pranks on his friends in Mater and the Ghostlight, but they were harmless. He does call the tractors dumb on occasion, and, unintentionally, can put Lightning McQueen in danger.

With Lightning, the protagonist, obviously having the goodness standard, Mater surpasses by a long shot.

Up to you guys. He could be Pure Good in my opinion but what do you guys think?