Utakata (ウタカタ) was a missing-nin from Kirigakure, as well as the minor supporting character of Naruto and the jinchūriki of Saiken, the Six-Tails, which has been captured and sealed by Akatsuki, causing his death when the beast was extracted. However, upon his reincarnation, Saiken was resealed within Utakata.

He was voiced by Suzumura Kenichi who also voices Okita Sougo from Gintama in the Japanese version and Michael Sinterniklaas who also voices Mikey Simon from Kappa Mikey and Leonardo from Teenage Mutant Ninja Turtles in the English version.

At some point, Utakata became the jinchūriki of the Six-Tails, Saiken. At first a loyal shinobi of Kirigakure, he left the village during the "Bloody Mist" era and was captured many years later by an unspecified member of Akatsuki. Having Saiken extracted from his body, he died at the age of 26. Sometime after his death, Kabuto acquired some of his DNA to use for his future plans. In the anime, his life in Kirigakure and as a missing-nin was expanded upon. As a student of Harusame, Utakata returned with a scroll saying a ninja should carry out and complete his mission swiftly. Frustrated at his student, Harusame angrily said that Utakata's job was to track and locate the scroll; not return it. Harusame would go on to say Utakata's life was precious, mentioning that a ninja should not run away from conflict nor should he involve himself in a battle that was unnecessary. Nonetheless, he was grateful for his student to be safe and alive. Throughout Utakata's time working under Harusame, his master ultimately saw the tailed beast within him as a burden and took it upon himself to learn of a way to extract the Six-Tails.

Some time later, Harusame had attempted to extract Saiken from Utakata, believing the Beast would only cause trouble in his student's life, thinking he would be better off without it. The process didn't go as planned, and instead of removing the tailed beast, Harusame forced Utakata's transformation into Saiken and was killed by it, in an effort to prevent itself from being extracted which unknowingly to him, would have resulted in Utakata dying. With only fragmented memories of the incident and the impression of betrayal, Utakata grew disillusioned and skeptical of the relationship between a master and student. He became a wanderer, constantly fighting off people who were after him, particularly the hunter-nin sent from Kirigakure to retrieve him.

One day, he was attacked again. A girl named Hotaru, who happened to be there, assumed the assailants were after her. Utakata managed to fend off his attackers, but was injured in the process. Believing that Utakata had saved her, Hotaru took him to her family's fort for treatment. After he recovered, Hotaru begged him to train her in his ninjutsu, but Utakata adamantly refused, not wanting to become anyone's master.

In the manga, Utakata is described as a charming individual. Akatsuki member Deidara indicated that Utakata was possibly one of the jinchūriki that loathed humanity, due to being neglected and hated by his village, none of whom came to rescue him when he had been captured.

In the anime, Utakata's character is given a bit more depth; he was usually depicted with a stoic, calm and carefree personality, preferring solitude and not particularly talkative. However, bringing up the sensitive subject of student-master relationships roused his annoyance and anger. Hotaru was often on the receiving end of Utakata's ire on this matter as she constantly nagged him to become her "master" (師匠, shishō).

As a result of his complicated relationship with his late master, he utterly despised the word, having remarked that he wasn't foolish enough to ever take on the title. Originally he very much despised his master, soured by him seemingly betraying his trust and trying to kill him as he had believed, but somewhat swayed by Naruto and Tsurugi's words, he came to realise and accept the truth of what had happened. In one instance, he said, "I told you not to call me master", to Hotaru as he floated away in a bubble. Hotaru's unyielding attachment and reverence to Utakata flustered him. Despite Utakata's genuine protective feelings for Hotaru, they were hard for him to acknowledge and express due to his nomadic nature and scarring past, though he acted on them if ever Hotaru is in danger. When Hotaru showed Utakata the kinjutsu that had been sealed into her, he visibly displayed anger and outrage that someone would do something like that. He also had a strong sense of honour, often determined to repay his debts to others (like his assuming a guardian role to Hotaru since she and Tonbee saved him). Like Naruto, he had resolved not to rely on his tailed beast for power, aware of the destruction it may cause, an indicator of his maturity. Tonbee also commented that Utakata lacked greed.

Interestingly, Utakata seemed to have a better relationship with his tailed beast than most, as he could ask it to fully release its power without it forcefully overtaking Utakata's consciousness. Saiken accomplished only the task wished by Utakata and receded into him without any resistance.

Utakata was a tall, thin young man with pale golden eyes and brown hair that reaches to his shoulders. In the manga, his eyes were very narrow, whereas in the anime his eyes were more of a typical size. His side parting let a large portion of his bangs cover the left side of his face. He wore a long, light blue kimono adorned with a small emblem of three bubbles on the back, and a pair of grey pants underneath, with an orange sash. The kimono hung loose, exposing his chest. In it, he carried a bamboo jug filled with a soap solution, and a pipe.

In the anime, during his time in Kirigakure, he wore a full body grey suit along with a variant of the village's flak jacket which had very low shoulder guards as well as a zipper and a pouch on the upper right chest. He also wore the village's forehead protector, fingerless gloves, as well as bandages on his forearms. 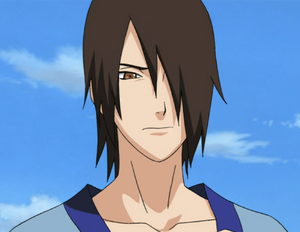 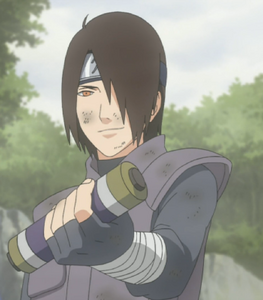 Utakata during his time in Kirigakure. 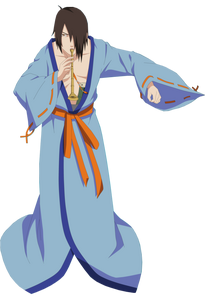 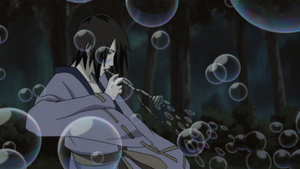 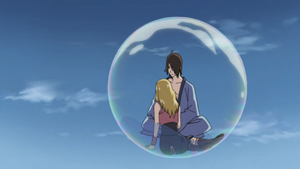 Utakata travelling inside one of his bubbles. 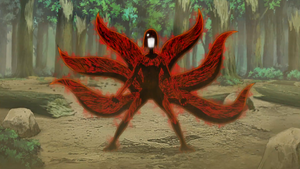 Utakata in his Version 2 form. 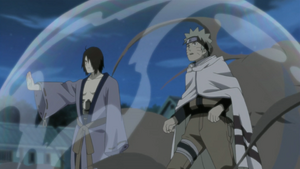 Utakata protects Naruto and himself in his bubble dome.