Fighting gangs from other schools.

Uzu Sanageyama (猿投山 渦 Sanageyama Uzu?) is a main character in Kill la Kill. He is the leader of the student council's Elite Four. He regulates the athletic clubs at Honnōji Academy, including the boxing and tennis clubs.

Uzu is a teenager with mid-length dark green hair and gray eyes. He wears a Three-star Goku Uniform, specially made into a long white coat with a high collar. It has a built-in sword sheath at the back and three spikes on each shoulder. The coat is usually open at the front, which shows his cadet-blue colored vest. He wears a matching white pants and shoes, and a belt with three metal spikes on the front.

After having his eyes sewn shut, Uzu started wearing a long green bandanna with two stars from temple to temple and two white marks where his eyes should be, which often humorously spread open or squint closed accordingly. After receiving the Blade Regalia Mk.III, he started using a golden bandanna, and after Blade Regalia Mk.III was destroyed and he joined Nudist Beach, he started wearing a black bandanna. When his eyes were restored after gaining his Supreme War Regalia, he wore his bandanna around his forehead instead of his eyes.

At the start of the series, Uzu is rather laid back and cocky, possessing absolute confidence in his abilities, always eager to test himself against worthy opponents. However, this changed after his humiliating defeat by Ryūko. Humbled by the loss, he goes to great lengths to redeem himself afterwards, losing his laid back demeanor and gaining new found conviction and determination.

Sanageyama's uniform transforms into a hulking, dark green suit of armor that resembles a standard kendo suit. It is capable of extending shinai from its gauntlets, and carries a pair of back gauntlets from which he can produce more shinai blades. It grants Sanageyama superhuman strength and speed (to the point where he could create illusory images and outrun Ryūko at Senketsu's full speed). It was destroyed by Ryūko after she blinded Sanageyama with part of Senketsu's cloth.

A revamped version of Sanageyama's old uniform, given to him by Satsuki after he sewed his own eyes shut, demonstrating his resolve to overcome his own weaknesses. It loses the back pieces that allowed him to pull extra shinai blades, has a slightly more streamlined look and a lighter color scheme.

A further improved version of the Blade Regalia, sporting a slimmer and more agile appearance than the Mk.I and Mk.II. The armor is now majorly white with details in green, and has six spikes protruding from the abdomen. With this version of his Goku Uniform, he was able to clash on even grounds with Nui Harime, who had previously bested him effortlessly.

The final version of Sanageyama's Goku Uniform. In its inactive form, it has the same form as his previous Uniforms, expect its black with several gold highlights. In its active form, it resembles its Mk. III Uniform, except being black with neon green highlights and with his head, partial upper body and left arm uncovered. His shinai blade is now made of neon green energy, resembling a lightsaber.

Three years ago before his time at Honnōji Academy, Uzu Sanageyama was the Northern Kanto Gang Leader Alliance Representative and led a contingent of 500 middle-school pompadour gangsters to confront Satsuki Kiryūin when she challenged them. When she easily defeated the 500 gangsters with just her fighting spirit, Uzu personally confronted her, using his Tengantsu to dodge her attacks. However, when he tried to attack her from behind, Satsuki asked him whether he had really managed to get behind her and then defeated him with a backward sword thrust. After his defeat, Sanageyama was invited to Honnōji - as an ultimate stage where he can unleash his full strength. He was the last of the Elite Four to join Satsuki. 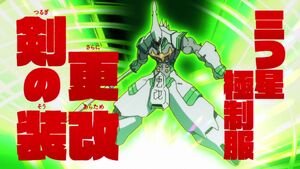 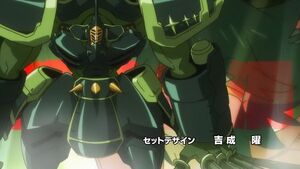 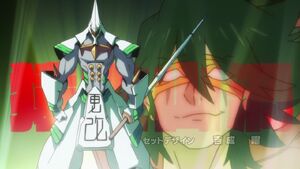 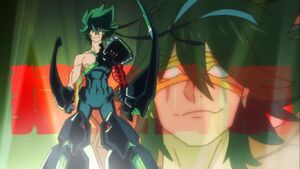 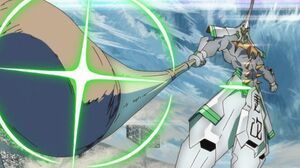 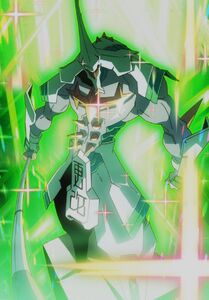 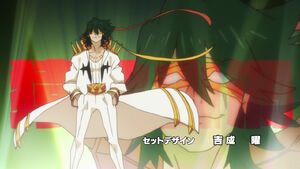