Uzume Tennouboshi is a new Console Patron Unit (CPU) in Megadimension Neptune Victory II. A dreamer girl who fights alone in a spirited way in order to save the Zero Dimension.

Uzume is a fair-skinned girl with red-orange eyes and long, sanguine hair worn in pigtails located near the bottom of her head, held by hair that has been knotted. It has a few black clasps and a pink gradience nearing the bottom. She wears a very small black tube top under an opened white jacket with a bright orange, black, and white tie. She also wears a pair of pleated shorts worn with a pair of thin black suspenders, and open to reveal her orange underwear, and also black fingerless gloves over a pair of orange and black sleeves, matching socks, black shoes and a pair of black leg warmers with buttons on them.

As Orange Heart, Uzume keeps her long red hair, but it becomes light orange and at the base, is looped in a loose circle, resembling a ribbon, while the rest of the hair runs loose. The hair surrounding her face elongates and her eyes become light blue. She gains a white-themed outfit with accenting of orange and blue.

She is blunt, but deep in she is loyal and passionate. Her words and deeds are strong-minded, but she also has an intense daydreamer side.

Her appearance is a complete change from her spirited and her blunt personality before the transformation, she changes to the soft personality of the "Honya system". She calls the enemy monsters "Doggie" and seems to lack tension by going at her own pace, but at the core she's really serious. 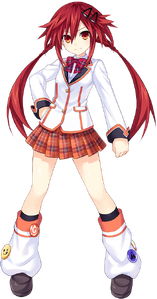 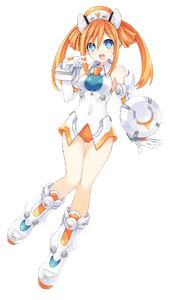 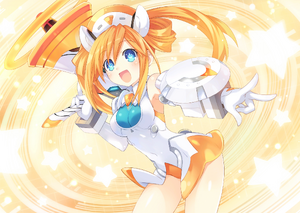 Retrieved from "https://hero.fandom.com/wiki/Uzume_Tennouboshi?oldid=1885279"
Community content is available under CC-BY-SA unless otherwise noted.