Kill those involved in the Larkhill atrocities and avenge Valerie Page (Succeeded).
Blow up Parliament on the 5th of November (Succeeded).
Bring down the corrupt Norsefire dictatorship (succeeded in death).

V is the main protagonist from V for Vendetta and the deuteragonist of the movie of the same name. He is a terrorist and freedom fighter from a dystopian future battling against a corrupt fascist regime in England known as the Norsefire party. It was intended by the author of the story Alan Moore that V be sufficiently morally gray so as to be seen as both a hero and a villain. While V in the comics is well-meaning and battling against unambiguously evil individuals, he himself is also depicted as a completely ruthless and callous figure who is willing to kill anyone who gets in his way. Conversely, the movie version of the character, though still occasionally indulging in ethically sketchy and ruthless behavior, is still ultimately more heroic. In the movie he is shown to be disfigured (a result of burns) instead of being described as being ugly. His abilities are a result of biological weapons experiments instead of hormonal experiments, as they were in the comics. He claims to have lost all memory of his past, completing his transformation into the "every man" he claims to be in the comic. At the end of the film, he says that he has fallen in love with Evey.

There are several other plot deviations between the book and the movie. In the film, he only bombs the Old Bailey and Houses of Parliament buildings and not the Jordan Tower, Post Office and 10 Downing St buildings. It is Peter Creedy who confronts V at the end of the film, instead of Eric Finch. Creedy shoots and kills Norsefire leader Adam Sutler (Adam Susan in the graphic novel), but V refuses to uphold his end of the bargain he made to Creedy, who is just as evil as Sutler. Creedy and his men then shoot V, but V wore a breastplate to keep the barrage of bullets from killing him.

Though still mortally wounded he manages to kill Creedy and his men. He then goes to Evey and dies in her arms. Evey then gives him a Viking funeral, as she did in the graphic novel. Finch then confronts Evey, but puts down his weapon after giving in to his hatred of the corruption of the Norsefire regime and joining Evey as they watch V's bomb destroy the Houses of Parliament.

In the film, he was portrayed by Hugo Weaving.

Very little is known about V, with one of the exceptions being he has a background in the military. Early in his life, V was captured and put in Larkhill retirement camp in room V (probably how he got his name) where he is experimented on and tortured. While there, the woman held captive in the cell next to his,  Valerie Page, had written her life story on toilet paper about how  how she was captured and tortured for being a lesbian, and passes the message through the wall connecting theirs. She was executed later. This broke V, and he burnt down the camp and escaped, but not before getting badly burnt himself in the process. It's implied that the experiments also had an effect on his mind.

At the beginning of the graphic novel, V comes to save Evey Hammond after she is nearly beaten and raped by three of Norsefire's "fingermen". Taking her into his care in The Shadow Gallery, V then goes after and captures Lewis Prothero, the former commandant of the camp and the voice for Norsefire's computer FATE, and drives him insane. He later seeks out the sadistic pedophile Bishop Anthony Lilliman and, with Evey's help, entraps him and forces him to consume a cyanide-laced communion wafer. Finally, he seeks out Delia Surridge and, because she was remorseful for her actions, gives her a peaceful death via lethal injection.

It is shown that he has been systematically killing all those involved at Larkhill with the exception of Prothero who remains incurably insane. He also broadcasts a message over the nation's communications with the declaration that every citizen is at fault for permitting the Norsefire government to step in.

Over time, he begins to groom Evey into becoming a successor after initially throwing her out for questioning him if he could be her father or not. However, his method of doing so entails kidnapping her while disguised as Norsefire agents and torturing her for information on the threat of death. When Evey chooses to die over revealing anything or pledging loyalty to Norsefire, V reveals himself and declares her to now be closer to understanding true freedom. Despite her initial hesitation, Evey ultimately dons a Guy Fawkes mask and cloak as his ally.

In the underground tunnel, V prepares a subway train full of explosives to crash upon his future command. This train is discovered by Detective Eric Finch, who manages to shoot and fatally wound V. In his final words, V requests that Evey continue on and that she give him a "Viking funeral". Understanding, Evey places V's still masked and cloaked body in a glass coffin aboard the train and sends it forth, crashing and exploding at its designated point. As the new V, Evey then takes in a young Norsefire agent with the intent of training him.

V is also shown singing a song called "This Vicious Cabaret" which details his intents as the story develops. This fits rather well with his theatrical nature.

V is portrayed far more as an anti-hero within the film adaptation with many of the same events occurring and a greater emphasis on the villainous nature of Norsefire (such as turning the leader Adam Susan into more a Hitler analogue with the surname Adam Sutler). Nevertheless, he still commits rather questionable and suspicious acts like the torture of Evey although he does show remorse for these actions. In the film, he is mortally wounded while fighting Sutler's right-hand man Peter Creedy - whom he kills by snapping his neck - and dies in Evey's arms. Evey then loads his body into a subway train filled with explosives, which she sends off to blow up the Houses of Parliament.

V is an enigmatic figure who speaks eloquently. He is impeccably sophisticated, obsequious, and talkative, with an exceptionally wide vocabulary, and particularly showing a fondness for quoting Shakespeare, and has an encyclopedic knowledge of old English literature. Also, V loves to act with a flair of theatrics. For example, as he abducts Prothero, he ushers the man through a stage-like setup of Larkhill while dressed in a clownish Vaudeville attire. In another particularly poignant scene, he stands before the statue of Lady Justice and enacts a pseudo-rendezvous between ex-lovers, declaring that he has found a new mistress in Anarchy after she "whored herself" to Norsefire and leaving Lady Justice a "farewell present" of an explosive. In the film, V demonstrates an intense capacity for hatred underneath his serene exterior: while in captivity, V described hate as the only thing he seemed capable of - it fed him for years until he finally lost all capacity for fear. He is completely unfazed by physical threats from others, from being held at gunpoint by several armed men, to having explosives strapped to him.

He is completely calm, reserved, and unexcitable in nature, and never loses his temper once throughout his appearance, and even when in intense pain he speaks softly and calmly. V was also pathologically obsessive and psychopathic, and his one and true goal throughout the story is to avenge himself upon key members of Norsefire. However, he has an incredible ability for justifying his actions. He is capable of love, despite his ruthless and almost emotionless character, and though he cannot remember anything that happened to him before his captivity he describes Evey as his one true love.

His favorite film is the Count of Monte Cristo.

Guy Fawkes Mask: V for wore a Guy Fawkes mask to conceal his identity. The mask was made out of a tough material, enough to hurt a finger man's hand when he punched V in the face. The mask was also bulletproof, with bullets only scuffing it.

Daggers: V carried six medieval renaissance parrying daggers as his main weapons of choice which he could also use as throwing knives.

Explosive Vest: V wore an explosive vest in order to take over the broadcast station.

Concrete injection device: V used a gun like device to inject liquid concrete into a door in order to halt authorities from stopping him. 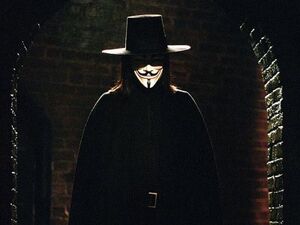 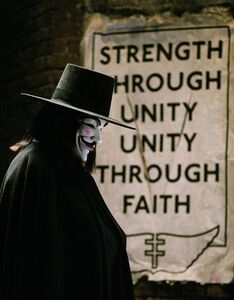 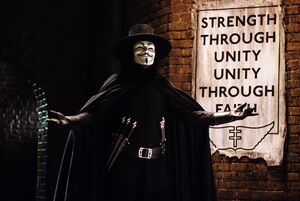 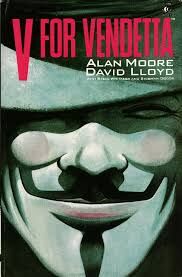 V as he appears on the cover of the comic 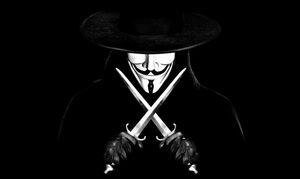 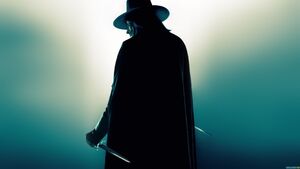 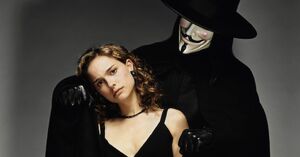 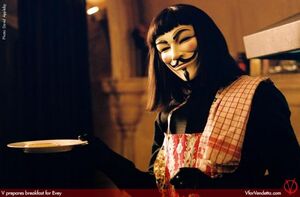 V with his cook's apron on 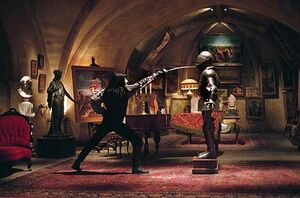 V pretending to swordfight while watching the Count of Monte Cristo 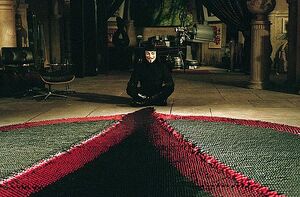 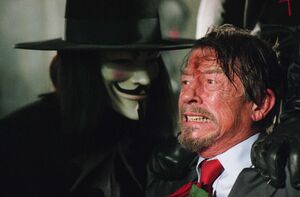 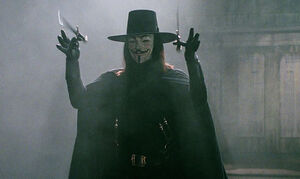 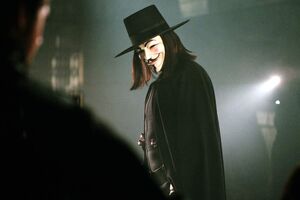 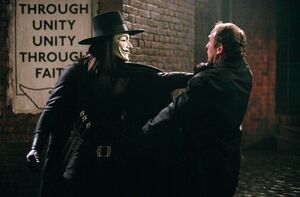