Vada Sultenfuss is the young heroine and main protagonist of the 1991 film My Girl and the 1994 sequel My Girl 2.

She is played by Anna Chlumsky.

In Madison, Pennsylvania in the summer of 1972, 11-year-old Vada is a tomboy and a hypochondriac. Her father, Harry, is a widower who lives in a funeral parlor and does not understand her. Vada is obsessed with death and cares for her grandmother Gramoo who suffers from Alzeheimer's disease.

She gets teased by other girls except her friend Judy, and her special friend is Thomas J. Sennett, an outcast boy who is allergic to everything. Vada starts out befriending Shelly DeVoto and her father and Shelly get engaged. Then, she and Thomas share a kiss. After she loses her mood ring, Vada and Thomas search for it; Thomas eventually manages to find it, but he is killed by a swarm of bees. Her grief manages to do one good thing by rekindling her bond with her father; she learns that her mother's death wasn't her fault at all, and that things like her mother's death just happen without explanation. She hangs out with Judy and eventually finds her sense of purpose.

In Madison, Pennsylvania, in the spring of 1974, Vada is now a mature 13-year-old seeking independence. Her father, Harry, has married Shelly DeVoto, and they are expecting a baby. They still live in the Sultenfuss' funeral home, while her Uncle Phil has moved to Los Angeles where he works as a mechanic. Her grandmother Gramoo has passed away and Vada still wears the mood ring that reminds her of her late friend Thomas J.

To accommodate the new baby, Vada moves out of her bedroom and into a finished room in the attic, and that brings further problems with adjustment. She even thinks about getting her own apartment while spending a night out with her father.

Vada is given a school assignment to write an essay on someone she admires but has never met. She decides to write about her mother but has little to go on, all confined to a small box. Among its contents are programs of plays her mother was in, a passport, and a mystery paper bag with a date scribbled on it. She expresses her desire to travel someday, but Shelly concocts a plan for her to travel to Los Angeles during her spring break, where she can stay with her Uncle Phil and do research on her mother, who lived there growing up. Harry does not go along with the idea, saying Vada is too young to be traveling by herself, and fearing what might happen to her in L.A. Eventually, he lets her take the five-day trip.

On arriving in L.A., Vada finds herself confronting a boy her age named Nick (Austin O'Brien), who comes to pick her up at the airport instead of Uncle Phil. Nick is the step son of Uncle Phil's girlfriend Rose (Christine Ebersole), and he is asked to show Vada around the city. While annoyed at first about sacrificing his own spring break, he helps her with the difficult search of learning more about her mother. Their relationship, which starts out reluctantly, slowly grows stronger. Vada and Nick meet several people who knew her mother. Some of the things she finds out don't sit well with her, such as her mother being suspended from school for smoking. Two of these acquaintances have a look at that paper bag from Vada's small box of memories about her mother, but neither can decipher it. When another blurts out the name Jeffrey Pommeroy, thinking that he is Vada's father, but isn't, she is crushed, and wonders why her father never mentioned this person. Eventually, but with some hesitation, she goes to see Jeffrey, her mother's first husband (John David Souther). He provides her with valuable information to help with her assignment, including home movies and the answer behind the date written on the paper bag. An a cappella rendition of the Charlie Chaplin song "Smile" appears in the home movies, sung by her mother (Angeline Ball).

As Vada is about to head home, she and Nick share a final moment at the airport, ending in a kiss. Plus, she receives earrings from him as a gift (she gets her ears pierced while in L.A., even though Nick is against the "barbaric custom"). When she returns home, she realizes Shelly had the baby, and it's a boy. She sings "Smile" to her new half-brother to calm him, the same song she heard her mother singing in the home movies. Her essay on her mother gets an A+. 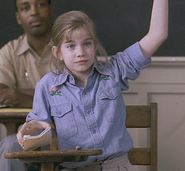 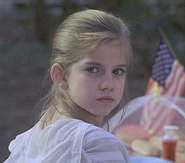 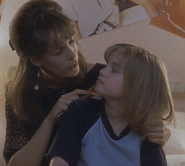