Assist Champa anyway she can.

Vados is a supporting character in the 2015 Japanese martial arts fantasy manga series Dragon Ball Super and its 2015-2018 anime television series adaptation of the same name.

Vados was an Angel who served as the Attendant to Lord Champa, the God of Destruction of Universe 6. One of the twelve known children of the Grand Minister, she was the older sister of Whis and the most powerful being that resided within Universe 6. Like all Angels, Vados had an emotional detachment from her God of Destruction and the Universe she lived in due to her status as a Guide sent from the great beyond.

She is voiced by Yuriko Yamaguchi in the Japanese version, who also voiced Nico Robin in One Piece and Nurse Joy in Pokémon, and by Caitlin Glass in the English version, who also voiced Kyoko Kirigiri in Danganronpa: Trigger Happy Havoc, Nefertari Vivi in One Piece, Mina Ashido in My Hero Academia, Kim Diehl in Soul Eater, Dia Viekone in The World's Finest Assassin Gets Reincarnated in Another World as an Aristocrat, Haruhi Fujioka in Ouran High School Host Club, Machi Kuragi in Fruits Basket (2019), Cammy White in Street Fighter IV, Miria Harvent in Baccano!, Winry Rockbell in Fullmetal Alchemist, Maki Nishikino in Love Live! School Idol Project, Ryouko Kusakabe in Date A Live, Elma in Xenoblade Chronicles X, Evergreen in Fairy Tail, Deneve in Claymore, Retoree in Show By Rock!!, Sarasvati in Is This A Zombie?, Ameisha Kichougasaki in Love Tyrant, Saki Nikaido in Zombie Land Saga, Pipimi in Pop Team Epic, Eila Ilmatar Juutilainen in Strike Witches, Rose in Tales of Zestiria, Ragna the Bloodedge (young) in BlazBlue: Alter Memory, 5pb in Hyperdimension Neptunia, Diancie in Pokémon, Sumomo in Sgt. Frog, Erica Fontaine in Sakura Wars, Takane Katsu in Burst Angel, Souka in That Time I Got Reincarnated As a Slime, Willow Schnee in RWBY, and Hitomi Kanzaki in The Vision of Escaflowne.

Vados, as a member of the Angel species, had teal skin, violet eyes, and white hair. Her long straight hair was tied into a neat high ponytail that travelled down passed her waist and she possessed a delicate frame similar to her younger brother Whis.

She carries a long scepter with a gem that floats above it, and she usually holds her staff in her right hand. Around her neck is a large light blue ring. Her attire consists of green robes, a black cuirass with the same white and orange circle decorations as Champa the Destroyer, and a red sash. She also wears white high heeled shoes with black soles.

Vados is confident of her fighting skills. When telling Goku who was stronger between her and Whis, she claims to be superior by a little, but Whis objects to this. Vados wanted to test their power after Whis stated this. She can also be rather blunt and coy at times. Vados tells Goku that by looking at Champa's and Beerus' physiques, you can tell who's stronger.

She can also be mischievous. One time on Champa and Beerus' birthday, Vados knew Champa would want to fight Beerus if she only put one Puff-Puff fruit on their birthday cake. This is pointed out by Whis when Beerus and Champa are fighting.

Vados is one of the very few Angels who holds any care for her Universe. Despite all her taunts at Champa whenever he loses, she showed genuine sadness when it was finally time for her to part with her student and bowed to him respectfully.

Vados was an Angel born and raised in the Angel Realm whose father was the Grand Minister, the personnal vizier to the supreme ruler of the Multiverse Grand Zeno. She and her younger brother Whis trained together, during which she had the edge. Vados and Whis were given the responsibility of overseeing the Gods of Destruction of Universe 6 and 7 respectively. As a result, Vados began serving and mentoring the obese Destroyer Lord Champa while Whis began guiding Champa's twin brother Lord Beerus.

On one occasion, Vados mischeviously prepared a joint birthday cake for Lord Champa and Lord Beerus that only had a single puff-puff fruit on top of it, knowing full well that the ownership of said fruit would likely lead to a fight between the Gods of Destruction. As she had expected, Champa and Beerus began a duel across space after the latter ate the fruit without consulting the other. Multiple planetoids were destroyed in the clash, during which Vados was berated by Whis for her mischevious actions.

Eventually, the fight escalated to the point that both Gods of Destruction were willing to destroy the universe they were residing in as an afterthought of their titanic battle. At that point, Vados and her younger brother stepped in and knocked their respective Gods out cold with single chops to the back of their necks. Lord Champa and Lord Beerus, on the suggestion of Whis, decided that they would henceforth have a contest every time they met that would revolve around whose universe had the better food.

Search for the Super Dragon Balls

Over several decades, Vados accompanied Champa during his search for the Super Dragon Balls across Universe 6 and 7. These seven planet-sized wish orbs could summon the Eternal Dragon Super Shenron, who had the power to grant a person any wish immaginable, upon being brought together. As Champa didn't want his brother to discover him, Vados and her master stayed mostly incognito during their search in Universe 7.

While Beerus was busy elsewhere, Vados and Champa destroyed planet after planet hoping the Dragon Balls would be hidden under their surfaces. Their activity was eventually noticed by Kibito Kai and Old Kai, two Kais who oversaw creation in Universe 7. Vados quickly transported herself and Champa to the Sacred World of the Kai, where they briefly questioned the two Kais on whether they knew what Champa was doing in Universe 7.

The Kais claimed ignorance, which satisfied Champa enough to make him leave the world and continue his search. Later on, Vados and Champa were finally able to locate another one of the Super Dragon Balls. A scout ship for Universe 7's Galactic Frieza Army also found the orb at the same time, which prompted Champa to destroy the vessel and any possible witnesses. In all, Vados and Champa were able to collect six of the Super Dragon Balls, leaving them one short.

Vados and Champa reach Beerus' planet. Vados tells Goku and Vegeta that she is Whis' older sister and that she is a little stronger than he is, but however, Whis disagrees. Vados also tells them that Champa is Beerus' twin brother and that he is the God of Destruction of Universe 6. It is explained by Whis to them that Universe 7 and Universe 6 are twin universes, equaling 13. Vados was told by Champa to search for their universe's Earth while he and Beerus have a food duel. She finds it and tells everyone that the Earthlings have been driven to extinction due to war. Champa declares a Universe 6 and Universe 7 tournament over having the Universe 7's Earth using five warriors from their respective universes.

After Whis explains why Beerus and Champa don't fight anymore, the rules for the tournament are discussed. The rules are that if Champa wins, he will use the Super Dragon Balls to switch the universes' Earth. To Vados' surprise, she knows that Goku has knowledge of the Dragon Balls. If Beerus won, he will give the six balls he had but Beerus would have to find the last one on his own. The tournament will be held on the Nameless Planet in five Earth days at 10 a.m. Vados and Champa leave Beerus' planet after this.

Vados and Champa are on the Nameless Planet arranging the arena. Vados asks Champa if he's picked his team, and he responds that he notices that Goku and Vegeta are Saiyans and that he needs Saiyans for his team. The day of the tournament, Vados is on the Nameless Planet waiting for the arrival of Universe 7's team. Once they arrive, Vados commences the writing exam to be eligible to compete in the tournament. Vados says the exam is ten basic questions to test their basic intelligence and they are given ten minutes but you must receive a 50 or higher to participate. After the time is up, Vados reveals everyone except for Majin Buu is able to compete, leaving the tournament five-on-four.

The tournament begins with the first match between Botamo and Goku. Vados is surprised to see Goku moving at an unbelievable speed, going beyond her expectations of him. Botamo is beaten by Goku by a ring-out because Goku could not deal damage to Botamo. The next fighter for Universe 6 is Frost, going up against Goku. When Goku transforms into a Super Saiyan against Frost, Vados seems surprised of seeing this, implying she doesn't know about Super Saiyans.

In Age 780, Champa decided to challenge Beerus to a game of baseball between their universes under the pretense of "cultivating friendship." His actual goal was to use the game (which he didn't even know the rules for) as an excuse to gorge himself on the food found on Universe 7's Earth. Vados used the opportunity to convince Champa to participate in the game himself, as she knew it was one of her rare chances to coerce him into excersizing. Auta Magetta, Botamo, and Cabba from the Tournament of Destroyers were all selected to play for Universe 6's team.

On the day of the match, Vegeta and Goku's younger son Goten were also added to Universe 6's roster to balance the teams. Due to the fact that they were the only ones who actually understood the rules aside from Universe 7's team captain Yamcha, Vados and Whis acted as joint umpires. During the game, both Angels had to stop the game numerous times due to the amount of rule breaking that occured on both sides. Eventually, the two Gods of Destruction lost their tempers and began to engage in a titanic battle with one another.

Fearing the destruction of Universe 6 and 7, Vados and Whis stepped in and calmed down their Destroyers. In light of events, the Angels decided to end the match but not before declaring Universe 7 the winning side, as Yamcha had ran to home base while the Destroyers were fighting. Vados then transported Champa and the Universe 6 warriors back to their reality while noting to herself that Champa had become so engrossed in the competition that he had ironically left without eating any of Earth's food.

Vados appears with Champa at the Tournament of Power preliminaries, watching the Universe 7 vs Universe 9 match.

Vados, as the teacher of Champa,the God of Destruction of Universe 6,is extremely powerful and is far stronger than her student,as evidenced when he could effortlessly knock him out with a light neck chop,who had been seen to be more or less Beerus's equalin power, and the strongest being in Universe 6. Vados also claims that she is superior to Whis and was confident in her ability to defeat Whis when he objected to her statement,implying that when they trained, Vados was stronger than Whis,something which Whis admits in Xenoverse 2,and in their present time,Vados could still fight on equal,if not,superior grounds with him.

Vados in the manga 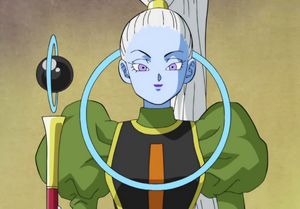 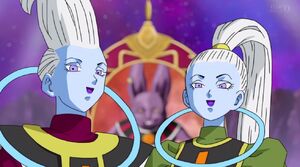 Vados with her younger brother Whis. 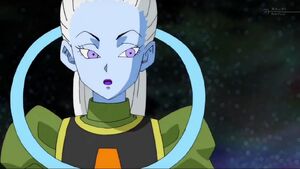 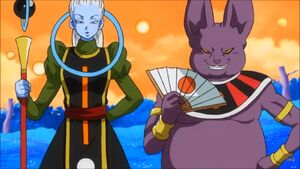 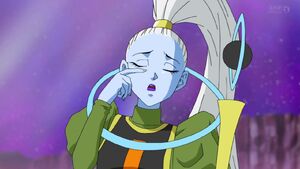 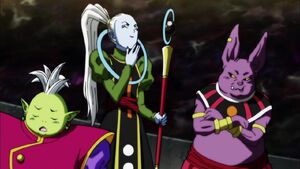 Vados at the Tournament of Power. 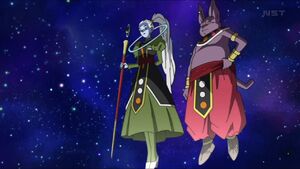 Vados about to destroy a planet. 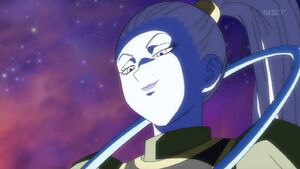 Vados after destroying the planet. 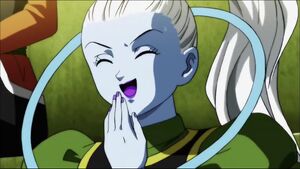 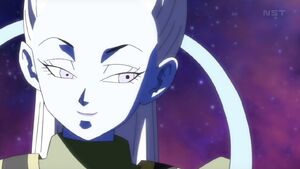 Vados being sarcastic with Champa. 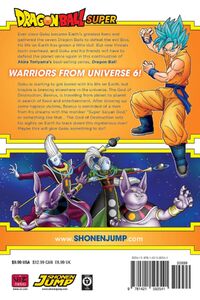 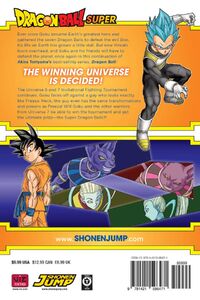 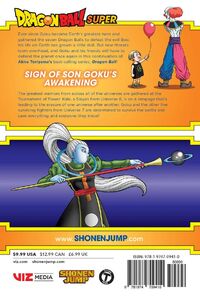