Vaggie is the deuteragonist of Hazbin Hotel. She is Charlie's supportive girlfriend and helps her to reform sinners despite her doubts.

Vaggie was originally a prostitute in life and at some point died in the year 2014 becoming a demon. Later on, she would then go on to meet Charlie and the two began dating ever since. Vaggie would later help Charlie found Hazbin Hotel despite her doubts on and would later meet Angel Dust who vaggie had antagonistic relationships due to his reckless behavior. She and Charlie would later meet Alastor who Vaggie is fearful of and tries to warn Charlie that making a deal with him who jeopardizes the Hotel. Charlie convinces Vaggie that Alastor's help would be beneficial for the hotel so Vaggie relents. During which after Alastor has dealt with Pentitus in the ending of the pilot Charlie smiles and goes back inside the hotel with Vaggie smiling but still doubts if this partnership with Alastor would work,

Vaggie has an aggressive temper and controlling tendencies. She is also the most sensible and more level headed of the group she genuinely cares for Charlie and is quite protective of her, and also is a bit of a Neat freak. According to Angel, she seems to distrust men. Her temper explodes as seen with Angel dust and Alastor due to the former's actions ruining the reputation of the Hotel and the Latter's evil intentions. 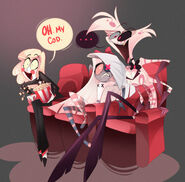 Retrieved from "https://hero.fandom.com/wiki/Vaggie?oldid=1958670"
Community content is available under CC-BY-SA unless otherwise noted.