Superhero, Ragnarocker, God of Rock, Member of the Justice Friends

Valhallen is a character from the universe in Dexter's Labortory, and the deuteragonist of the Justice Friends segment. He is a parody of Marvel's Thor and the late stereotypical hardrock guitarist Eddie Van Halen. He wields a pink Flying-V axe instead of a mighty hammer. He also shows some traits of He-Man. He acts like a male teenager and speaks with a California surfer-like accent.

In every episode, Valhallen appears as a tall and muscular Norse angel with long blonde hair obscured his eyes and wore a gray head band around his head with wings as the inspiration of Thor's helmet, a black, ripped, sleeveless shirt, and black tights held by a black belt with metal spikes. In addition, he has knee-high golden boots. As his main weapon, he wields a pink, Flying V electric guitar to manipulate the source of his superpowers.

Valhallen is described as a mellow and calm person with his speech in a stereotypical Southern Californian accent and disposition who rarely or actually gets mad if ever. His accent clashes, but with the bits of Shakespearean English language in his dialogue. He is interested in music and singing as well as singers, of whom he collects small golden statues in his respective room. While his usually laid back demeanor makes him dumb, he has the wisdom that befits a divine and tends to become the most level headed of the Justice Friends if both Major Glory and the Infraggable Krunk overreacted to something different. Now he is with both Major Glory and Krunk in the apex floor of the Muscular Arms apartment and they be good friends despite their differences and quarrels. The Monster Truck Pull is notably his favorite TV show.

With his guitar, Valhallen can manipulate the thunderous superpowers. 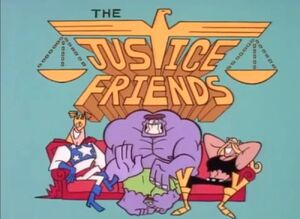