Valiant is a little wood pidgeon and the main protagonist of the 2005 Disney film of the same name.

He's a short patriotic pigeon who wanted to join the Royal Homing Pigeon Service during World War II. He was teased for thinking that he could do so. It turned out that it was his size that enabled him to accomplish a great deed.

At the climax, Valiant manages to defeat the evil falcon General Von Talon by luring him into a trap and tied his cape up with a hook and rope to dangle next to a water wheel, which buffeted him back and forth on the falcon

For his actions during the war (he managed to sneak down the gun barrel and retrieve the plans) nurse Victoria to be his girlfriend.

He is voiced by Ewan McGregor who played Mark Renton, Obi-Wan Kenobi, Christian, and Rodney Copperbottom. 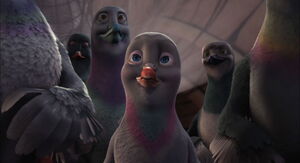 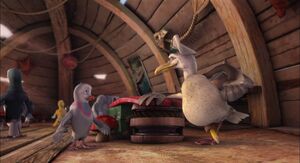 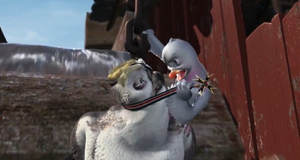