Valiente is the former secondary antagonist turned tritagonist of Ferdinand.

He is voiced by Bobby Cannavale also voiced Frankie from The Nut Job 2: Nutty by Nature and Jack Gore as his younger self.

Valiente is a strong, muscular, primarily brown bull with big horns, black hair on his head, piercing, brown eyes, short legs and a large, broad, gray snout with yellow skin around it. He also has some scars. One of his horns is broken. He is shorter in height than Ferdinand. Generally he has a hostile or serious expression on his face.

He lost most of his left horn when he wanted to fight against Ferdinand.

Since a young age, Valiente was violent, argumentative, loathsome, impolite, direct, egotistical, negative, stubborn, bitter, temperamental, serious, cold, cruel, unsympathetic, arrogant, hard-working, disrespectful, mean and aggressive. He cared a lot about his father but unfortunately his father didn’t care about him as much.

As his name suggests, he is also very brave.

After losing his horn and taking him to the abatorium, it is revealed that deep down Valiente has a sensitive side. Valiente accepted his destiny of dying until Ferdinand convinced him that his life was not limited to being a fighting bull.

He is currently level-headed, instructive, even-tempered, understanding, pleasant, and empathetic.

Valiente is first seen as a calve in Casa Del Toro with Guapo and Bones training to fight. They stop when the bull carriage is crashing in front of their enclo, meaning that the matator is there to pick the next bull that will fight during the Corida. Valiente begins to brag about being the next bull chosen and one that he will beat the matator and live the rest of his life like a king.At this moment, adult bulls are released. Calves are going to watch the fight. Raf- Ferdinand's father becomes the winner. Valiente tries to cheer his father, but he is treated coldly by him. Ferdinand tries to approach him, but Valiente is angry and goes away. When Raf does not return from the fight, you can see that Valiente is sorry, but under the influence of his father's cold words, Valiente loses sympathy for Ferdinand.

After two years, when Ferdinand returns to Casa del Toro, he meets Valiente and immediately recognizes him. At first the bull tries to be nice, but quickly shows that he has not changed at all when he claims he will beat Ferdinand in the arena. In a mocking manner, he greets him again in Casa del Toro, then leaves.

On the next day, Valiente along with other bulls is awakened by Lupe, who enthusiastically informs them of the arrival of someone called "El Primero". The bulls go outside to see who the one whose arrival Lupe has announced so emotionally. Valiente tells Guapo to be calm, but he is panicking. Bones is angry at Valiente for being particularly annoyed by Guapo, although he knows that he is nervous.Bulls watch El Primero appear in Casa del Toro and announce he is here to find the perfect bull with which he will fight his last fight before retirement. Bulls show their skills in front of him, but it ends with failure thanks to Ferdinand, who tried to help Guapo, who fainted, caused a mess. Everyone is angry with Ferdinand, who caused the mess and the show ended in a fiasco skills.

Valiente states that Ferdinand has grown very much, but he is still "the little coward he has always been". The black bull tries to defend himself against the argument of Valiente and says, "that the fact that he does not want to fight does not mean that he is afraid". Then the noise is heard from the court, so everyone is going to see what's going on, it turns out that Guapo is sent to Chophouse. Bones blames Valiente for what happened to Guapo. However, the second is trying to clear off the accusation, claims that everyone knew that Guapo could not cope in the arena and that's better. Ferdinand asks him if this is the reason why their friend is going to be killed, but Valiente states that since Ferdinand has escaped, this is the situation, "either fighter or meat." Then he coldly calls Ferdinand "meat" and leaves.

The next day, Valiente notices that the other bulls have sympathized between them and with Ferdinand after he humiliates the arrogant horses at the dance. Disgusted, he will break the mood by coldly reminding his fellows that a bull is always supposed to be fierce, which Ferdinand tries to contradict by evoking other places much better than here. Valiente in turn asserts that the only way out is to defeat the matator before criticizing Ferdinand for his belief to be dispute when from Valiente's point of view, he is not.

In the evening, Ferdinand comes to warn the bulls of the horrible fate that awaits them at the arena after he infiltrates Moreno's house trying to escape. Valiente absurdly refuses to believe him, clinging to his ridiculous belief that it's either this beat or die. When Ferdinand accuses Valiente of being scared just because he doesn't want to run away, the brown bull gets angry and pushes Ferdinand outside while yelling at him to fight, like when they were little. Ferdinand refuses to face him so Valiente charges him horn to horn while Ferdinand only resists without retaliating. In the moment, Valiente shows his cruelty in broad daylight when he calls Ferdinand as weak as his father before attacking even more violently. In the clash he accidentally breaks his right horn but the worst part is that El Primero has everything and chooses Ferdinand to be the bull he will face tomorrow. Valiente is then taken to the slaughterhouse, his confidence and ambitions breaked.

Young Valiente and his father 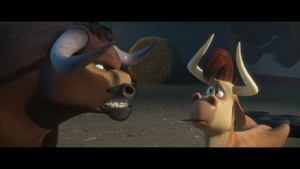 It'll make me look even better when I beat you to a pulp inside the ring. Welcome back, Ferdinand