Heroes Wiki
Register
Don't have an account?
Sign In
Advertisement
in: Approved Good Articles, Pure Good, How to Train Your Dragon Heroes,
and 44 more

Mom (by Hiccup)
Val (by Stoick)

Protecting and training dragons at her sanctuary.

Save the dragons, Berk, and her family from the evil tyrant, Drago Bludvist (succeeded).

Valka is the overarching protagonist of the How to Train Your Dragon franchise.

She is the wife of Stoick the Vast, the mother of Hiccup Horrendous Haddock III, the grandmother of Zephyr and Nuffink, and the aunt of Snotlout Jorgenson.

She is voiced by Cate Blanchett who also portrayed Galadriel.

Valka initially comes across as more feral than human, given how she has had more dragon contact than human contact. Her years of isolation and dealing with nothing but dragons has made her very distrusting of humans in general, reaching the point that she feels distant from them. Because of this, she has an absolute and black-and-white, perhaps even fatalistic view about people, believing them incapable of change and that some people are "born different".

Valka is strong and uncompromising in the belief that she can make the world a better place for dragons, treating talk of the trappers and their abusive treatment of the creatures with scorn. Despite her bitterness over her fellow man, Valka's past as a wife and mother allows her to possess overwhelming love for those in her care, succeeding in building good relationships with the dragons she rescues

When flying with Hiccup, Valka reveals a more liberated side of her personality. Without the fear of hurting others, Valka is strong and unafraid, yet with a sense of feeling free. She shows confidence in herself and proves herself be a incredibly daring woman during her feats of agility on the backs of dragons. Valka can be quite sensitive and is very careful not to upset people, as shown when she is afraid that Stoick and Hiccup are angry with her because she chose not to come home. She also acts as a strong pillar of support for those that need it, always the first to provide her son with the confidence he needs to achieve his goals.

Valka has auburn hair kept in three separate braids behind her back and has pale skin. Unlike most Viking women, she has a slim figure. She wears a yellow long sleeve tunic, an orange belt, and brown pants that appear layered. Over her tunic is a chest plate with a large fur collar. It has large round shoulder pads. She has armbands and boots with spikes on the sides. She has a few layers of cloth around her waist, with her right leg exposed.

Valka's "dragon" outfit has a chest armor and large armbands with talons above her hands. She also wears a red, torn cape and strips of fabric around her waist. She occasionally wears a masking helmet with horns and tusks that represent a Bewilderbeast to hide her identity. This disguise is covered in blue and red paint.

In the flashback of her past, Valka was seen wearing a sleeveless green shirt over her tunic, and a fur one over that as well. Her belt was also different and brown armbands that covered her forearms.

During a battle on Berk against the Berserkers, she fought them with only her fists. Following Stoick and Valka celebrate their victory by singing a song. They then married after that and have a son, whom they named Hiccup Horrendous Haddock III. About 15 years prior to the events of the first movie, it was revealed Valka had spent years protesting against the war with the dragons but no one on Berk ever listened to her. During one particular attack, a large four-winged dragon broke into the Haddock house, prompting Valka to rush in to protect an infant Hiccup. When she saw the Stormcutter however, she realized that it was not attacking but was instead merely curious about the human infant, even if accidentally giving him a scar in the process. The dragon then approached Valka and the two appeared to make a connection as she saw that everything she had believed about dragons was true. Stoick burst his way into the room and threw an ax in between the Stormcutter and Valka, thinking the dragon was threatening his family. Most likely thinking that Stoick was actually attacking her, the Stormcutter grabbed Valka and flew off with her in its grasp, leaving Stoick and the rest of Berk to believe she had been killed.

Valka was instead taken to the Dragon Sanctuary, the home to a giant white dragon known as the Bewilderbeast along with thousands of other dragons. Valka decided to stay with the dragons, believing Stoick and Hiccup would be better off without her interference in the war between Viking and Dragon. Accepting the fact that Berk could not make peace with the dragon no matter how she had pleaded, Valka soon made it her life's work to rescue other dragons from Drago Bludvist and his trappers. With the help of the dragon who brought her there, Cloudjumper, Valka spent the next 20 years learning the secrets of every dragon species out there.

Prior to the beginning of the second film, Valka had managed to break into Eret and his trappers' fort where she, Cloudjumper, and her Bewilderbeast destroyed it and freed the trapped dragons.

Due to her presumed death, Valka doesn't appear in person during the first film or the subsequent television series, but is mentioned several times.

During the events of the first film, Hiccup is given a helmet made from half of Valka's breastplate armor as a reward for his success in Dragon Training. Stoick's helmet is made from the other half to keep her close.

Gift of the Night Fury

In Gift of the Night Fury, a passing dragon knocks the helmet off Hiccup's head when he and Toothless are out flying. After Hiccup gives him a new tail that allows him to fly solo, Toothless flies off for nearly four days looking for it. During Toothless' absence, Stoick tries to comfort Hiccup, saying he knows what it's like to miss someone you love, referring to Valka.

20 years after her abduction, Valka and Cloudjumper encounter another rider on the back of a Night Fury, mistaking him for one of Drago's men or trappers. Using some of the other dragons that are flying with her, she captures the boy and brings him to a cave at the Sanctuary with the intent to interrogate him. Valka is intrigued by the boy's knowledge of dragons as he gently calms down her own dragons as they approach him. One of her dragons brings in the Night Fury and she is amazed by how close the pair of them are. Valka approaches them both, pacifying the Night Fury in submission before she notices the small scar on the young man's chin. Valka realizes that it is Hiccup, the son she thought she would never see again, questioning how it is possible before revealing her identity to him.

Valka shows Hiccup all the things she's learned about the dragons, including the existence of the Bewilderbeast and her work protecting the dragons. She also reveals the truth of when she disappeared and helps both Hiccup and Toothless learn new skills to aid in their flying. Regretful for how she had not been there for him during his childhood, she asks her son for a chance to start over, a chance that Hiccup happily accepts. However, despite her renewed relationship with Hiccup, she refuses to help him in his quest to find Drago, saying that Drago is beyond redemption.

Later on, Valka is reunited with Stoick and Gobber after the pair of them follow Hiccup in an attempt to bring him home. Expecting Stoick to be mad at her, Valka tries to justify her reasons for not returning home, that the people of Berk could not change and believing Hiccup would be better off without her. But Stoick doesn't listen since he's overjoyed to see her again, which causes her to cry. While Valka is still initially uneasy to be around Stoick again, her uncertainty fades when he begins to sing a song from years before. Stoick asks Valka to come home, which she accepts.

However, the family reunion is cut short when Drago and his army attack the Sanctuary. Valka, her family and the den's dragons join her to defend themselves against Drago and save the dragons under his capture. She has a brief skirmish with Drago who reveals that he has a Bewilderbeast of his own. After Valka's Bewilderbeast is killed in the ensuing fight between the two dragons, Drago orders his Bewilderbeast to finish her but she is saved from death after Stoick intervenes. From afar, Valka watches as Drago forces Toothless to turn against Hiccup thanks to the Bewilderbeast and becomes heartbroken when Stoick sacrifices himself to save Hiccup from the dragon's fire.

She attempts to quell her son's grief, knowing that Toothless was forced to do the act against his own will. Valka acts as one of the Vikings who perform the traditional ceremony for Stoick, using her bow to set his ship on fire. Even with all the dragons being taken by Drago, as well as her husband's death, Valka still comforts Hiccup, encouraging him that he is the only one who can bring the world of Vikings and dragons together.

Valka, Hiccup and the other dragon riders ride the baby Scuttleclaws to Berk and sees that Drago has frozen most of the island with his Bewilderbeast. She watches with encouragement as Hiccup frees Toothless from Drago's control until the two of them are frozen in the Alpha's ice. Though Valka initially fears her son's death, she watches in astonishment as Toothless breaks Hiccup and himself free from the ice with a unique blast. She is again astonished as Toothless challenges the Alpha to protect Hiccup and eventually triumphs over Drago and his Bewilderbeast. Now reunited with Cloudjumper, Valka fulfills her promise of moving to Berk along with all her dragons from the Sanctuary.

On a scouting patrol, Valka notices Grimmel's approaching army and quickly reports back to Hiccup. Hiccup and the dragon riders head to capture Grimmel; yet, they fall into his trap and barely escape. 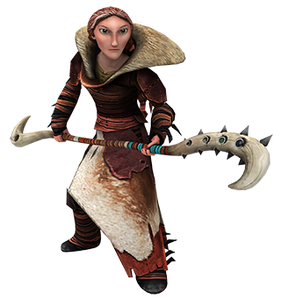 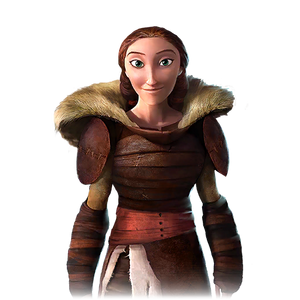 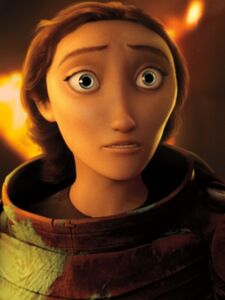 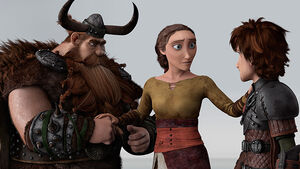 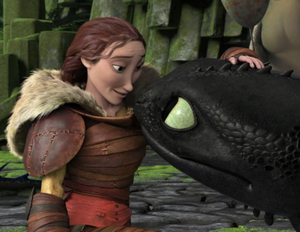 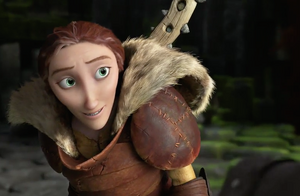 Valka seeing husband lying on the ground after saving their son from a brainwashed Toothless.

Valka against Stoick's chest, listening for a heartbeat.

Valka realizing her husband is dead.

Valka mourning the loss of her husband.