Valkenhayn R. Hellsing is a hero from BlazBlue who is the butler of Rachel Alucard and a former member of the Six Heroes. He has served under the Alucard family for generations. His life-force value is around 2,394,211.

He was voiced by Motomu Kiyaokawa in the Japanese version, and by Doug Stone in the English version.

A former member of the Six Heroes, Valkenhayn has been a faithful ally of the Alucard family for hundreds of years, and serves Rachel's every whim as her Battle Butler. Behind his elderly, seemingly withered form lies a secret: he is actually a werewolf. Like Makoto, he is a beastkin, but of the lupine lineage, and in his youth he used to be a vigilante before becoming acquainted with Rachel's father Clavis. When Clavis died, Valkenhayn promised his friend that he would look after Rachel in his stead. Thus, when Rachel turns up missing in Kagutsuchi, he heads out to find her.

He also appears in Bloodedge Experience series of novels, as his younger self; here, he's a member of a vigilante group "Immortal Breakers", together with his then-partner, Relius Clover. He was a more savage person who often starts unnecessary fights and has a really mean streak. He first attacked Naoto, then went to hunt Clavis Alucard together with Relius (Clavis wasn't his master back then), and then appears to abduct Naoto's sister.

Valkenhayn is a novel gentleman: polite and courteous in all situations. Being a butler, he is extremely devoted to Rachel and does whatever he can to assist and protect her. His demeanor, however, belies a savage side which is only seen during battle or when he is pushed to the brink of his anger. He uses a fighting style that, while awe-inspiring, is unbelievably brutal, utilizing slashing attacks and blows so powerful they look like they are intended to break the enemy's bones.

Valkenhayn takes on the image of the stereotypical butler. He is an elderly man who wears a dark, aquamarine suit adorned with gold trimming. His long, white hair is tied in a ponytail at the back. In his youth, he still wore the suit sans the jacket, but had brown hair. When transformed, he takes the shape of a big, silvery-blue wolf with a white mane (formerly his hair). On a comedic note, supplemental materials reveal that the pink ribbon used for his ponytail was a gift from Rachel, and the ribbon can be seen in his wolf form adorned on his tail.

Being one of the Six Heroes, Valkenhayn possesses exceptional skill and power on the battlefield. His gentlemen-like behavior and profession as a butler belies a much more savage side that appears to have aged well with him. Valkenhayn fights with brute strength and incredible speed, unleashing swift kicks and claw-like attacks. Valkenhayn's Drive, Werewolf focuses on his mastery over lycanthropy, allowing him to transform partially, halfway or fully into a beast wolf form to tear his opponents to shreds unrestrained. A small purple gauge right above his Drive gauge determines how long he can stay in wolf form, automatically returning to normal once it runs out. The gauge regenerates when he is in human form but only when he is on the ground. When in wolf form, after Valkenhayn uses his command throw, the gauge fully regenerates and reverts him back to human form. Valkenhayn can morph between forms at will to take advantage of both for some devastating combo strings. While he gains incredible agility and speed, he is unable to block in this form.

His Drive, Wehrwolf (that's pronounced "vair-volf", folks), allows him to transform into a wolf for a limited time, which is determined by a gauge. In Chronophantasma, his Overdrive is Endless Wolf, which accelerates the recovery of his Wolf Gauge.

In the fourth game, his Exceed Accel is called Sieg Nagel where, after he stuns his foe with a bodycheck, he then does 2 clawing kicks at his opponent, before lifting them by the neck and then slamming them down to the ground, accompanied by rising shockwaves. His Astral, Blut Vollmond, has him performing a Flash Kick that knocks the opponent high into the air. He then transforms into a full werewolf form while the opponent still floats in the air with the moon in the background and performs several cross-slashes, ending with one final blacked-out slash that tears open the camera and leaves a trail of white on the screen. 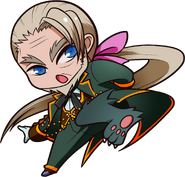 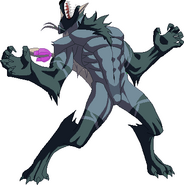