NOTE: This article is about the incarnation of Valkyrie from the Marvel Cinematic film series. The mainstream version can be found here: Valkyrie (Marvel).

Aid the Avengers and other heroes to defeat Thanos (succeeded).

Brunnhilde, also known as Valkyrie or Scrapper 142, is one of the two tritagonists (alongside Hulk) in Thor: Ragnarok and a major character in Avengers: Endgame. She will return in Thor: Love and Thunder.

She is portrayed by Tessa Thompson, who also portrays Agent M in Men in Black: International and voices Lady in the live-action remake of Lady and the Tramp.

Valkyrie was once a loyal warrior to the gods of Asgard. One day, the wicked sorceress Hela attacked, and many of her fellow soldiers were killed. Valkyrie was eventually stranded on another planet, where she would then served for the Grandmaster.

She first runs into Thor when he lands on her planet. Valkyrie tasers him and drafts him as a competitor against the Hulk. She would later be tricked by Thor, but help Thor, Hulk, and the other gladiators escape the planet.

Valkyrie eventually showed Thor her soft side when she revealed her haunted past and helped Thor and his allies fight and defeat Hela. She returned to wear her Valkyrie armor, and decided to aid her new king find a place for the Asgardians after Surtur destroyed Asgard.

Despite Valkyrie not appearing in the film, the directors revealed that Valkyrie and half of the Asgardians survived and escaped from the Statesman with several escape pods during Thanos' attack, and before escaping she called a help request to the Guardians of the Galaxy to save Thor, Hulk, Loki and Heimdall (despite only Thor being saved, as Hulk being saved by Heimdall who sends him to Earth with the Bifrost, Heimdall being killed by Thanos and Loki being killed by Thanos).

It's also confirmed that Valkyrie survived the events of the film because she was very far when Thanos exterminated half of the life forms of the universe.

Despite Thor and the Avengers' attempt to undo the decimation, they capture Thanos, and he reveals that he destroyed the Infinity Stones to prevent them from being used. Thor kills Thanos, and returned to Valkyrie, Korg, Miek and the surviving Asgardians, deciding to build New Asgard on Earth. Over the five years, Valkyrie more of the leader of the survivors, as Thor became depressed and guilt-ridden, drinking and playing video games to get over his failure to stop Thanos. Hulk and Rocket Raccoon go New Asgard to recruit Thor for the time heist, and they meet Valkyrie, who informs them where Thor is.

After Hulk/Bruce Banner uses the Nano Infinity Gauntlet to undo the snap and bring everyone back to life, Thanos attacks Avengers Headquarters in retaliation, alongside the Black Order, several Outriders and several Chitauri. Valkyrie joins the rest of the heroes in the battle against Thanos and his forces, known as the Battle of Earth..

After Thanos and his army are killed, Thor abdicated the throne of Asgard and crown Valkyrie as the new King of the Asgardians, who have found a new home in Earth. Afterward, Thor decided to leave the Avengers and join the Guardians of the Galaxy, becoming warmly welcomed by his allies. 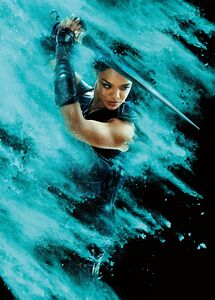 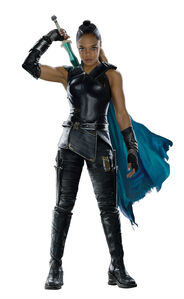 Valkyrie with the Revengers and Asgardian population. 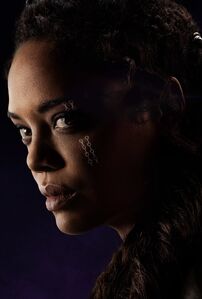 Valkyrie with Scarlet Witch and the Asgardians, ready to fight Thanos. 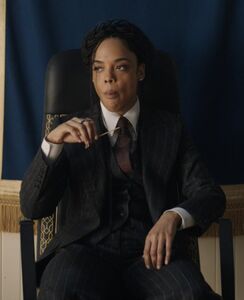 King Valkyrie at a meeting