A child of a god

Protect the innocent from evil.

Valkyrie is a classic Namco character from the series of the same name.

She was voiced by Kikuko Inoue in Japanese.

Valkyrie is the child of a god and lives on top of the atmosphere. When Marvel Land was in great danger because of the evil Zouna, the maiden Valkyrie descended from the skies in Valkyrie no Bōken: Toki no Kagi Densetsu to stop Zouna, facing many perils and befriends several persons like Kurino Sandra during her quest (having a short appearance in Sandra no Daibōken: Valkyrie to no Deai), passing by different continents until she reached Zouna's domain. After Zouna's defeat, Valkyrie returned to the skies.

In Valkyrie no Densetsu, Valkyrie descends from the sky again to stop the evil Kamooz, joining with Sandra to recover the Golden Seed.

Valkyrie also appears in other media related to her, and has cameo appearances in several Namco games like Marvel Land, Seme COM Dungeon: Drururuaga, Sugoroku Adventure: The Tower of Druaga, some games from the Tales series, as an alternate costume for Cassandra Alexandra in Soul Calibur II, and other games.

Valkyire makes an appearance in Project X Zone and its sequel. She is a support character for any of the playable characters. 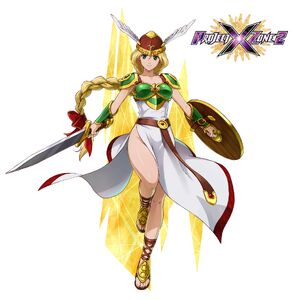 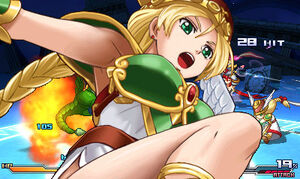 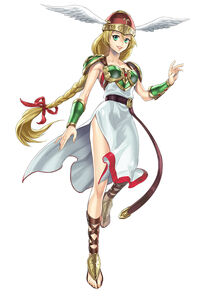