Choosers of the slain

Divine Psychopomp Amazons
Valkyries are a host of angelic female warriors who decide which fallen warriors will join Odin in Valhalla or Freya in her beautiful field Folkvang. They consist of either female warriors who died a honorable death in battle not unlike would-be einherjar they brought upon Odin's side appointed as one or minor deities who serves the latter and Freya.

Valkyries appear in different forms; they sometimes appear to fallen heroes as their lovers, daughters of royalty, swan/raven-like avian beings, or in older accounts, grim shieldmaiden who rides giant wolves.

Appearing as angelic shieldmaiden, Valkyries fly around the battlefield as they choose honorable individuals among warriors who involved in ongoing conflicts, riding either horse-pulled flying chariots, supernatural horses, or even flying wolves if not in their avian form of choice. Half of said warriors would go to Valhalla while the rest to Folkvang.

Though their portrayal as angelic shieldmaiden in service of both Odin and Freyja remained consistent in popular culture over the years, it must be noted that in early accounts pertaining these figures dated back to heathen times, Valkyries originally a lot more sinister. In addition of bearing grim reaper-esque aesthetics in their attires and riding flying wolves instead of beautiful steed, Valkyries are responsible for minor interferences in battlefields they visit to ensure the death of their chosen warriors so they could claim their soul as fast as possible (ex. a random arrow deflected in flight that struck weak part in a warrior's armor, the unexpected tearing on the boot of a warrior which gives his/her opponents an opening). Despite this, the Valkyries do have beautiful side for them representing both positive and negative aspects of the war and deaths that come from it. Indeed, those who Valkyries handpicked were warriors who died fighting for their personal honor and that of their people along with what they believed in to the point of more than determined to face adversities for it, including the very horrors of war itself, thus deserved to have their place in Valhalla or Folkvang.

While not claiming honorable souls on daily basis, Valkyries assumes the role of maids in Valhalla who brings Gods of Asgard and Einherjar alike their meals during their feasts.

As with well-known figures of Norse Mythology, Valkyries have been described in many films, comics, videogames, and books, as well as traditional lore. Some portrayals of these warriors maidens however, deeply emphasize their beautiful Amazonian side in favor of their sinister aspects in early accounts.

In Age of Mythology and its Nintendo DS version Age of Empires: Mythology, Valkyries appears as warrior maidens who can heal other units. The latter version of the game leans more to their older accounts since they ride large wolves as opposed of horses.

In real-time strategy game Northgard, there are two versions of Valkyries; special warband unit exclusive to Clan of The Kraken who happens to be transcendent form of a Norn (seeres who gathers at Hörgr to eludicate the will of the sea monster their clan themed after) and fallen variant that had been corrupted by evil magic of Helheim.

Valkyries appear in the mobile game Clash of Clans. They are a powerful unit that moves fast, has a lot of health, deals high amounts of damage, and can hit multiple targets at once, but at the cost of the highly valuable resource called Dark Elixir. 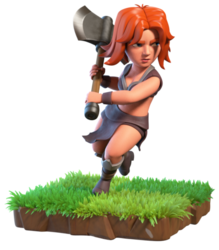 A Valkyrie in Clash of Clans 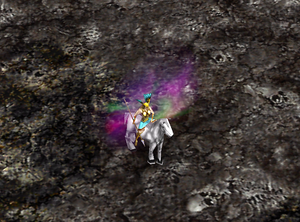 A Valkyrie in Age of Mythology 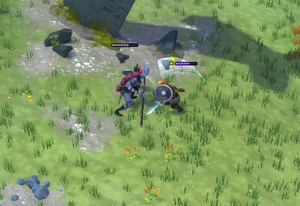