The Attendant of God

Governing angel in the religion of The Order

Serving the wishes of The Order in the name of their God.
Stalking the chosen "Mother of God".

To ensure the coming of The Order's God. (formerly; failed).

The monsters of Silent Hill

Valtiel is a preternatural monster that appears in the videogame Silent Hill 3, and this creature is a governing "angel" within the religion of The Order, who stalks the young heroine Heather Mason. He never attacks her, but in fact is "helpful" in an abstract sort of way, as he actually resurrects her in the case of a game over screen, perhaps as an attempt to resurrect The Order's eldritch God within Heather.

His name means "attendant" by way of the French word "valet"; his existence as an angel is derived from suffixing "-el". Thus, he is "Attendant of God".

In the mythology of the Order, Valtiel is an angel created by God when she was first born into the world. He is known as the "Attendant of God", and is viewed as the one who is closest to her.

During the events of Silent Hill 3, Valtiel is seen in various places by Heather Mason. He is constantly turning a valve, which is symbolic of the shifts between worlds that occur throughout the series. Late in the game, if Heather dies, the "game over" screen consists of Valtiel dragging Heather away, presumably to ressurect her. In doing this, he is trying to ensure the birth of the unborn God that rests within her.

During Walter Sullivan's forced conditioning at Wish House Orphanage, Jimmy Stone's right-hand man George Rosten attempted to insert Valtiel's influence into Walter's subconscious. This would presumably allow Valtiel to clandestinely guide Walter's actions, permitting the ritual of the 21 Sacraments to take place. The attempt was successful, but unbeknownst to George Rosten, he had authored his own doom, as he became Walter's 6th victim in his spree of ritual killings.

Valtiel appears at the tutorial of the game, commanding the player to find Howard Blackwood's shop. He also appears at the start of each zone offering the player an optional mission. If the player succeeds in completing the mission, Valtiel will reappear at the end of the zone and reward the player with a rare weapon or artifact.

A large sculpture of Valtiel is seen in Silent Hill: Revelation in the Order's hidden lair called the Sanctuary, which Christopher Da Silva is tied to while being held prisoner by Claudia Wolf and her followers. The Order's name is also extended to "The Order of Valtiel". Other than this, Valtiel has no role.

As God's attendant, Valtiel observes Heather in order to ensure the birth of God. His garb (consisting of a mask, smock, and gloves) is reminiscent of surgical wear, symbolizing his role in helping to deliver the reborn God. Valtiel could be identified with either Lobsel Vith or Xuchilbara, the Yellow Angel (also known as Yellow God) and Red Angel (also known as Red God) respectively, mentioned in "Myth 4: Creation". Both having been created to assist God in keeping humanity obedient to her, both are tasked with a rather important duty. Given Valtiel's distinction as being the closest to God, he could be synonymous with either one. In the same Myth, there is a being similar to Valtiel, if not Valtiel himself, in the bottom left of the painting. This, coupled with the fact that Valtiel and Pyramid Head have yellow and red colored heads respectively, could be further proof of a connection to the Yellow and Red gods.

Although he makes no appearance outside of Silent Hill 3, the presence of the Otherworld and the siren heard from afar in the rest of the series suggests Valtiel is there, watching over the safety of the "Holy Mother".

Valtiel is depicted as wearing gloves and an apron. The executioners in Silent Hill's early history based their uniforms upon these items, while adding a pyramid shaped hood. These accoutrements later inspired the creature known as Pyramid Head.

Also, the Order priest Jimmy Stone formed his Sect of Valtiel around this creature. They worshipped it as the closest being next to God, and therefore one of the most holy figures ever revered. 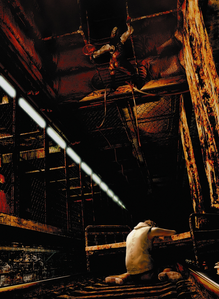 Valtiel above Heather crying in the Otherworld. 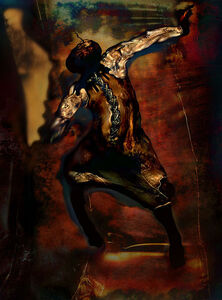 Valtiel in the opening video.

Valtiel turning a valve in the chapel.

Valtiel in the Otherworld. 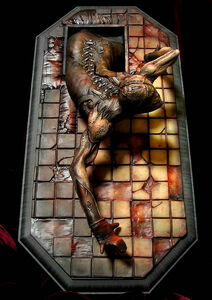 A statue of Valtiel. 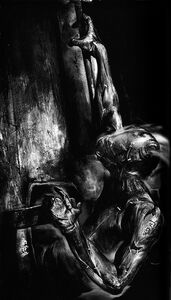 Valtiel in the novelization.