Using all of her Magiswords

Finding all of the Magiswords

Vambre Warrior is a warrior, the older twin sister of Prohyas, and one of the main protagonists of Mighty Magiswords.

She is voiced by Grey Griffin.

Vambre is a beautiful young woman who appears to be in her early twenties, with notably thick hips. She is fair skinned, with long violet hair and red-violet eyes. She usually wears a short-sleeved teal-green leotard held by a black belt, with blue-green gloves and boots trimmed black, and a yellow cape. Along with this, she often sports yellow circular earrings and headband.

Vambre is candid and aggressive. Like her brother, she is very adventurous, seeking to go out on many a quest in order to prove themselves as warriors. As exemplified in various shorts, she dislikes it when people pick on her brother, and will defend him when necessary. She despises pants, sporting a teal-green leotard instead. In certain episodes, she is heard saying "och", a nod to her British accent. She also has an irrational fear of squirrels, dating back to a childhood incident. 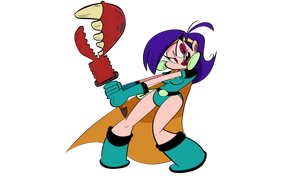 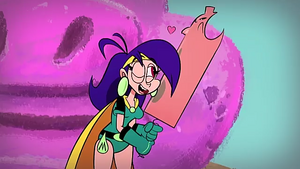