Heroes Wiki
Register
Don't have an account?
Sign In
Advertisement
in: Spoilers, League of Legends Heroes, Parents,
and 27 more

Hound of the Underground

Leader of the Undercity

Protect his kids and the Lanes (partially succeeded).

Vander is major character of the Riot Games/Netflix 2021 animated series Arcane. He was a Zaunite barkeeper and former revolutionary, as well as the adoptive father of Vi and Powder/Jinx. He was a good-hearted man who was respected by everyone from the undercity, serving as the de-facto leader of the Lanes.

He was once close to Silco but the two of them became enemies after having a violent falling-out. He was captured by Silco and dragged and imprisoned in his hideout but Vi, Mylo and Claggor try save him. The events of his rescue ended with Powder accidentally destroying the hideout, killing Mylo and Claggor and injuring Vander in the explosions and willing sacrifice himself to save adoptive daughter Vi after he save her he than tell her in his last breath to take care of Powder.

He was voiced by J.B. Blanc, who also voices Braum in League of Legends, Antiques Dealer in Scooby-Doo and Guess Who?, Orion in Avengers Confidential: Black Widow & Punisher, and Jai in Bleach: Memories of Nobody.

Vander was a large and muscular middle-aged man with grey eyes, dark hair, and a neatly trimmed greying beard. He was generally seen wearing blue trousers, leather boots, a brown leather jacket over a white undershirt, and a leather pauldron on his upper right arm to cover up the scar that he got from Silco when he was young.

When Vander used Shimmer as a last resort to save Vi, it dramatically increased his muscle mass, made him grow several feet in height, and made his veins purple and pop out all over his body.

Vander was a caring person who always willing to protect those that needed his help. He always cared for the Lanes and the people in them. He always acted in the interests of the Lanes and others instead of himself, and he always regretted betraying Silco. He also blamed himself for the death of Vi and Powder's parents, feeling a strong sense of responsibility as leader of the uprising, and he grew to detest war, seeing it as not worth the lives it cost. Still, Vander remained a fighter at heart and was willing to die for those he cared for, eventually dying to save Vi's life.

Vander and Silco were like brothers in their youth, and the two of them once fought together in order to free Zaun from Piltover's repressive rule. However, due to unknown circumstances, Vander eventually betrayed Silco and attempted to drown him in Zaun's polluted rivers. During the fight, Silco managed to stab Vander with his own dagger and escape back into the underground, leaving a large scar on the latter's right arm.

Years later, he try to lead the Lanes against Piltover due to the horrible living conditions that the citizens of Zaun were forced to endure on a daily basis. Unfortunately, the rebellion ended in a failure and dozens of Zaunites were massacred by enforcers in the ensuing battle.

After he failed the uprising, Vander come across two girls who are sisters named Vi and Powder, who had been orphaned in the attack. Stunned by the fact that his actions had cost them the lives of their parents, Vander adopted the two girls as his own daughters and vowed to live a more peaceful life for the sake of his new family. At some point after this, he also adopted two orphaned boys as his own sons, Mylo and Claggor, and teach his four adoptive kids how to survive and stay out of trouble.

After the failed uprising, he latter took control of the Lanes of Zaun and became the head of a bar called the Last Drop, which became the main meeting ground of the undercity. He would also broker an uneasy agreement with the enforcers of Piltover, which brought relative peace to the Lanes.

After a heist in Piltover by Vi and his kids, the peace in the undercity was at risk. Due to the raided house belonging to Kiramman Clan, the Wardens were tasked to apprehended the perpetrators in question. Not wanting to betray his own kids, he refuses to indicate anyone. This decision would cause the increased Warden patrols that would anger the rest of the undercity. Vander tries to council his people to keep the peace between the undercities and Piltover but many ignore him. With another uprising seemingly underway, even his daughter Vi wants to defend their home. He teaches Vi that violence never the answer and that it is best to protect what you still have then risk losing everything. Vi takes this to heart and tries to surrender to the Wardens in order to prevent the uprising. Learning this plan, Vander swaps places with her and gives himself to the Wardens. However, before he could be dragged to prison, an older Silco and his shimmer-mutated henchmen ambush them, killing several wardens including Sheriff Grayson and Benzo. He was captured by Silco and was imprisoned in his hideout.

Silco than tries to reason with Vander, sharing his vision for the nation of freeing the Zaun but he rejects the offer stating that he is not the same person anymore. Later on Vi, Mylo and Claggor arrive to save him but realizing it was a trap. Vi takes his old cast iron gauntlets to fight Silco's men, trying to give enough time for Mylo and Clangor to unshackle him and find a way out. The events of the fight would end with Powder accidentally destroying most of the hideout, killing Mylo and Claggor and injuring him in the process. He try to defend a surviving Vi, he takes his makeshift knuckles and starts fighting the surviving henchmen, however he is bested by them and stabbed in the gut by Silco, dropping down in a pile of vials of Shimmer. Injecting one, Vander is able to finally defeat the mutated henchmen, nearly close to defeating Silco as well, but decides to save Vi from the exploding wreckage instead. Injured from the explosions he then tells Vi to take care Powder before he passes out.

Following the events of Silco coup against him, he was presumed dead. However, even after his supposed death and Silco's takeover of the undercity and the lanes he was well-respected by the people of Zaun and remembered in a positive light by many. A statue of him was also built in the Lanes, where Silco would later go to and confide in when Jayce offered him Zaun's independence in exchange for Jinx 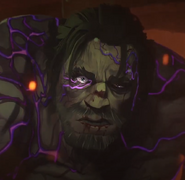