To work in her shop.

To help Barry save the flowers (succeeded).

In Love Heroine
Vanessa Bloome is the deuteragonist of the 2007 film Bee Movie. She is a flower-seller and her love interest of Barry who has a crush on her.

Vanessa Bloome is a kind person who gives bees sympathy.

Realizing that Ken is gonna kill a bee named Barry with his winter boots, she stopped him and saved Barry's life. She then berates Ken for trying to kill Barry.

Then, she picks up Barry with Ken's brochure in her hand while holding a cup, smiling at Barry. Then, she opens up a window and sets Barry free and says "Here you go, little guy".

The next morning, Vanessa was in her kitchen where she heard someone say hi and got startled. She then sees that the speaker was Barry, who had came to thank her for saving him.

At first, Vanessa surprised that a bee could really talk to her until they got along since they had something in common: their future, love, flowers and drink hot coffee.

Vanessa later shows Barry her workplace; a floral shop and told him about the Rose tournament.

When they both went to a store, Vanessa was shocked that the owner tried to kill Barry with a magazine and hit him back. Then, she told Barry if he was okay and Barry realized that honey was on sale at the store.

Later on, Vanessa was at the count with Barry who wished to sue humanity for "stealing honey" from the bees and he won the case. A few days passed, the honey belongs to the bees and the bees were happy at first, but the flowers were dying and Vanessa had no choice, but shut down her store since she got not flowers to sell.

Before she was about to leave, Barry tells Vanessa about his new plan to bring back the flowers.

Barry's plan works until the plane he and Vanessa use to transport the flowers in had a slight delay during the storm and Vanessa told Barry if they don't get back home on time, the flowers won't make it since they need water.

A few minutes later, Vanessa heard the captain when he called her name and went to the pilot station, realizing the captain and the co-pilot passed out.

At first, Vanessa got used to it until lighting strikes and she and Barry both realize that they were on autopilot the whole time.

Vanessa was upset and got panicked that she cannot do this until Barry told her to snap out of it and slaps her in the face. Then, they started to slap each other back until Vanessa realized the plane is flying.

Then, Barry realized that it was the Pollen Jocks helping. After landing, Vanessa was happy that Barry showed her how to fly and Barry got what he wants: to be a Pollen Jock.

Few months later, the flowers are back and everything was back to normal for the bees and the people.

Vanessa and Barry own their own place: "Vanessa and Barry: Flowers, Honey and Legal Advice". The last thing Vanessa told Barry is that she needed help to get some flowers for a funeral.

When Barry told her that he'll help her find it, she told him that he's a life saver and continued working. 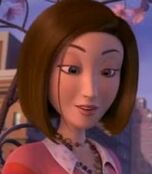 "My parents want me to be a lawyer or a doctor, but I want to be a florist. My only interest is flowers." -telling Barry that she know how he feel because she want to follows her dreams too

Vanessa expresses her longing to be in the Rose tournament

Vanessa was in shocked that Barry had just talked to her

"You just taught how to fly a plane!"

Vanessa telling Barry that she's heading to see the final of the Rose tournament since the flowers are dying.

"You coming?" -Vanessa flirting with Barry