Heroes Wiki
Register
Don't have an account?
Sign In
Advertisement
in: Articles under construction, Female, Comic Book Heroes,
and 22 more

Working at a chimichanga food truck

Mutant
Vanessa Carysle (also known as Copycat), is a character from Marvel Comics. She is the deuteragonist of Deadpool, and a major character in Deadpool 2.

She is portrayed by Morena Baccarin.

One day, while visiting a bar, she met Wade Wilson and the two eventually began a relationship. A year later, Wade would propose to Vanessa but eventually ended up getting diagnosed with cancer. Desperately trying to save her lover, Vanessa found multiple treatments for Wade. Despite this, the mercenary abandoned her one night and she spent the next few years mourning his loss.

Unknown to her, Wade had actually undergone a procedure that cured his cancer and gave him a healing factor and "super p****".However, the process had disfigured him, causing the mercenary to have a fear of revealing himself to Vanessa.

Eventually, the people responsible for Wade's procedure, Ajax and Angel Dust, now mortal enemies with the mercenary, learned of Vanessa's existence and kidnapped her. The two then took Vanessa to a decommissioned aircraft carrier in a scrapyard to kill her in an oxygen deprivation chamber.

Determined to rescue her, Deadpool, alongside X-Men members Colossus and Negasonic Teenage Warhead, confronted Ajax and his subordinates. After defeating his enemies and saving her, Deadpool revealed his new face to Vanessa who, despite being angry for getting abandoned, accepts him. The two then reconcile and share a kiss.

Vanessa has became proprietary of an orphanage and Deadpool has became a hero who kill lot of criminals, Vanessa say to Deadpool who she will adopt a baby for making a family together and Wade is happy for this, Vanessa talking about their son's name but then criminals enemies of Wade enters in their house and Wade fight with them killing them all, Vanessa is fine, but then the drug lord enters in the house and kills Vanessa, shooting her with a pistol. Angry and sad for Vanessa's death, Wade angrily kills the drug lord but despite having killed the killer, he is still sad and depressed because of Vanessa's death.

Vanessa appear several times in Wade pre-deaths experiences where she incurious him to saving the mutate kid Russell from becoming a evil killer in the future, at the end Wade die and finish with her but Vanessa say to him who is not time for him to stay with her and his family, his friends needs him.

In a mid-credits scene Deadpool travel in time with Cable's dispositive and save Vanessa stopping the bullet in time and killing the drug lord in the head, so Vanessa is again alive and the two will have a child, despite he has cancelled Vanessa's death, the events of the film remains who means who the X-Force, the rescue of Russell and Cable would happen even if Vanessa would remains alive, and now Wade and Vanessa are finally together again. 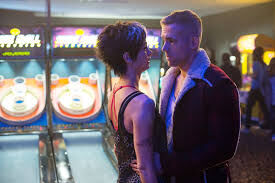 Vanessa and Wade on their first date

Vanessa was being held by Francis 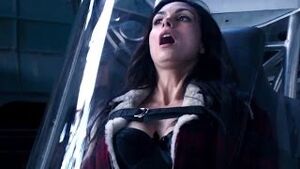 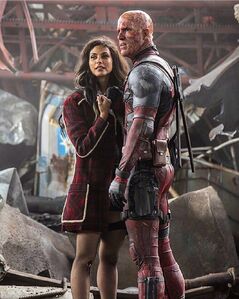